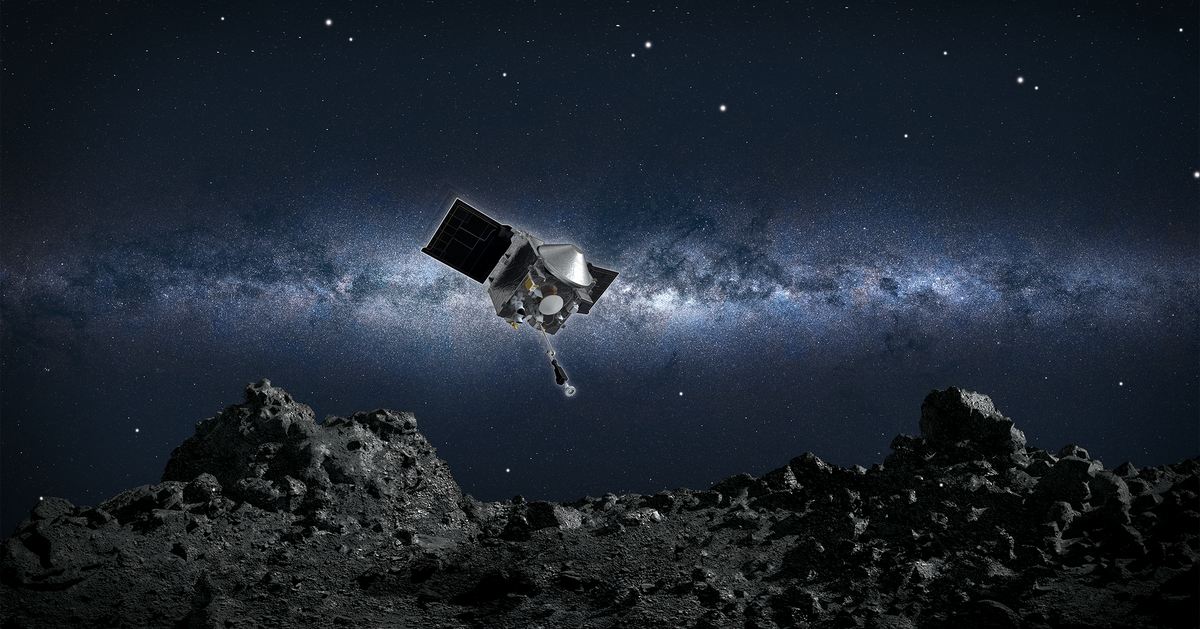 This afternoon, NASA’s OSIRIS-REx spacecraft will grab a small sample of rocks from the surface of an asteroid named Bennu zooming through space more than 200 million miles from Earth. It’s an ambitious task, but if it works, OSIRIS-REx may eventually return to Earth with the largest sample of material from another space body since NASA’s Apollo missions to the Moon.

The OSIRIS-REx spacecraft has been circling Bennu for the last two years, mapping its surface and hunting for the right spot to snag these rocks. After an intense amount of planning from the mission team, the engineers have a target all picked out on Bennu and are ready to send their spacecraft down to the surface. OSIRIS-REx will lightly touch the surface of Bennu with an extended robotic arm, which will then blast air onto the rocks and stir things up. The blast should send pebbles and dust up into the arm. The rubble will then be stored inside the spacecraft for the long journey home.

“four and a half hours of mild anxiousness”

The OSIRIS-REx team has already uploaded the commands to their spacecraft to pull off the maneuver this afternoon at 6:12PM ET. Everything must be on autopilot for this sample grab, since OSIRIS-REx and Bennu are so far from Earth. Radio signals take more than 18 minutes to reach the spacecraft, so if anything were to go wrong during the procedure, ground controllers wouldn’t be able correct the problem quickly. But OSIRIS-REx has practiced for this moment, doing two dress rehearsals that entailed descending down to the surface of Bennu without actually touching it. Today, the vehicle will hopefully make contact.

Things get underway at 1:45PM ET, when OSIRIS-REx stops orbiting Bennu and begins its slow descent to the asteroid’s surface. “This is much more of a four and a half hours of mild anxiousness,” Beth Buck, the mission operations program manager for OSIRIS-REx at Lockheed Martin, said during a press conference. The spacecraft should only make contact with Bennu for a mere five seconds, but it should be enough time to trap a sizable amount of material inside the vehicle’s arm. It’s going to be a while before we can confirm if OSIRIS-REx succeeded, though. The mission team hopes to get data back tonight that will verify whether the spacecraft touched the asteroid, but they won’t know until tomorrow if the vehicle actually retrieved a sample. The first images of the sampling will start to come in on Wednesday, and that should confirm if OSIRIS-REx grabbed anything.

Though we won’t be able to see the sample live, NASA is providing live coverage of the sample grab starting at 5PM ET, from inside Lockheed Martin’s control center. Additionally, you can track the progress of OSIRIS-REx on the mission’s website starting at around 1:20PM ET.