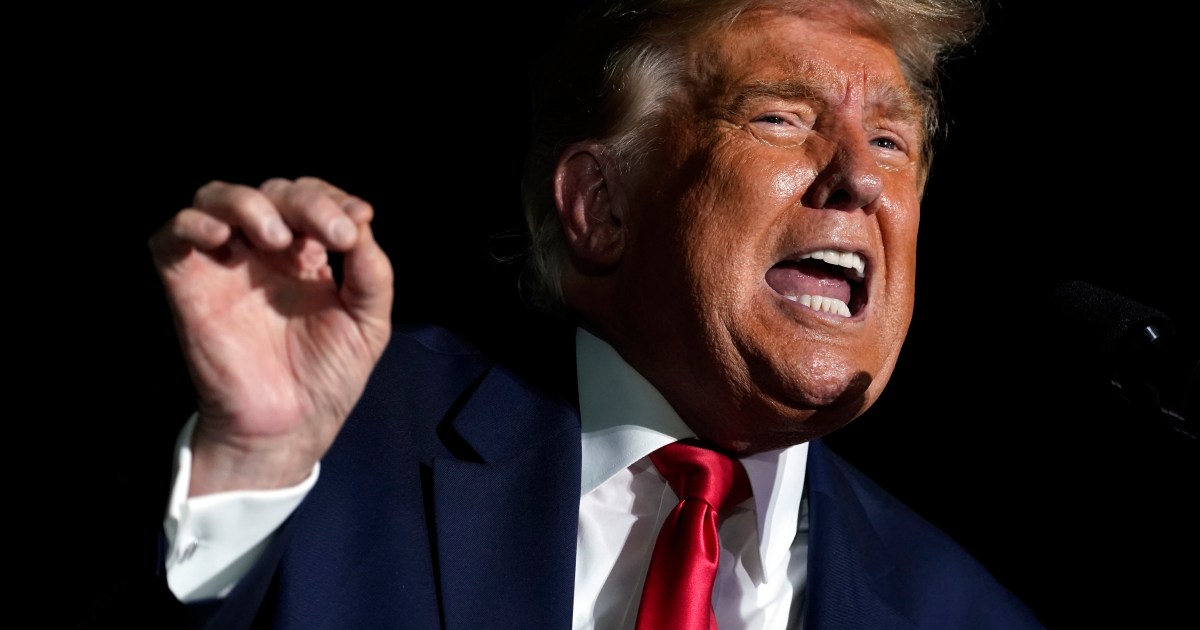 The White House and Senate Republicans appear to be on different pages when it comes to the size of another coronavirus relief aid package.

United States Senate Majority Leader Mitch McConnell said on Tuesday that the Republican-led Senate would vote on a scaled-down coronavirus economic relief bill next week, while President Donald Trump took to Twitter to push lawmakers for a stimulus bill that goes “big”.

Democrats have rejected Senate Republicans’ smaller bill as they hold out for trillions more in aid.

With negotiations on a broader package stalled, Republicans and Democrats are under increasing pressure to throw a financial lifeline to the nation’s struggling businesses and households.

But a compromise deal on another round of pandemic relief aid is proving elusive and expectations are a bipartisan deal will not be reached before the November 3 election.

With the political climate growing ever more acrimonious as election day nears, Senate Republicans also appear to be out of lockstep with Trump.

After pulling the plug on stimulus talks last week – only to do an about-face within hours and restart them – Trump tweeted on Tuesday: “STIMULUS! “Go big or go home!!!”

But McConnell said the full Senate’s first order of business when it returns on October 19 would be to vote on a not-so-big, relatively speaking, $500bn relief bill funded by leftover money from the now-expired Paycheck Protection Program (PPP) for small businesses.

He said the bill would include help for schools and liability protections for businesses – measures for which Republicans have been pushing. McConnell also said there would be more help for the unemployed workers in the bill, but did not give specifics.

Democrats, who control the House of Representatives, on Sunday rejected the stripped-down measure to use leftover funds from the PPP.

Pelosi on Tuesday laid out what Democrats view as the shortcomings of the $1.8 trillion White House proposal, which also met resistance from Republicans in the US Senate who say it is too large.

“Tragically, the Trump proposal falls significantly short of what this pandemic and deep recession demand,” Pelosi said in a letter to lawmakers. She described the offer made last week by Treasury Secretary Steven Mnuchin – the White House’s point person on coronavirus relief talks – as “one step forward, two steps back”.

Last week, Federal Reserve Chairman Jerome Powell warned that the fragile and stalling US economic recovery could be jeopardised without more virus relief aid from the government.

But Pelosi said she remained hopeful for a deal and appeared to leave the door open to additional talks. “Significant changes must be made to remedy the Trump proposal’s deficiencies,” she said. “Updates will continue.”

Her letter made it clear that Democrats view the White House offer as deficient on state and local government aid, COVID-19 testing and tracing, help for households struggling to pay the rent, worker safety, child care, relief for small businesses and other areas.

Pelosi took a swipe at Trump for his U-turn last week on stimulus talks while he was recovering from COVID-19.

“Following his tweet, the stock market went down and so did he in the polls,” Pelosi said in her letter. “The president only wants his name on a check to go out before Election Day and for the market to go up.”

Trump, who trails Democratic presidential candidate Joe Biden in many opinion polls, returned to the campaign trail this week.

5G is officially coming to the iPhone

Here is how much each new iPhone costs 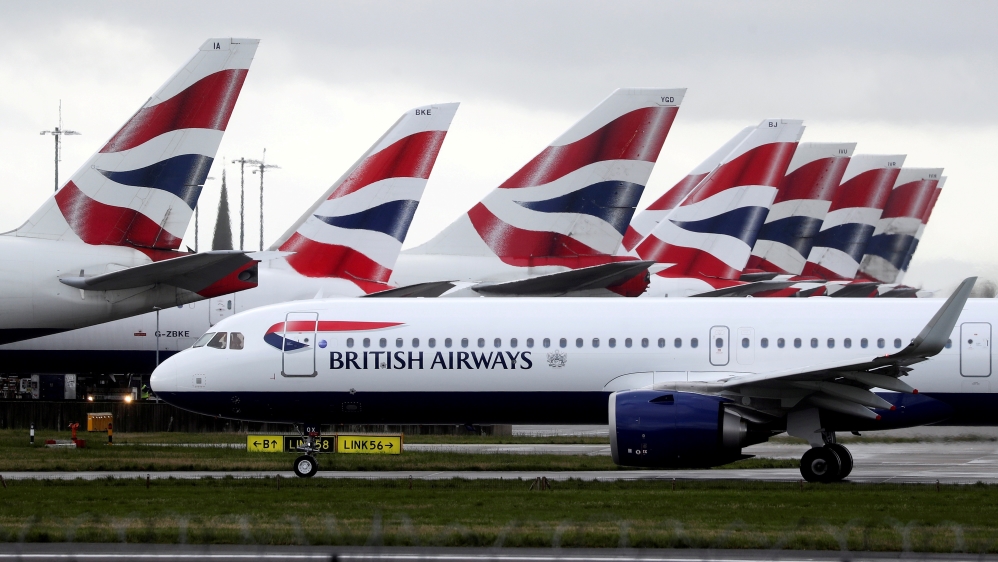 Passengers travelling to Hong Kong and Italy from Britain’s Heathrow Airport will undergo a one-hour coronavirus test before flying out of the United Kingdom under plans to open up international travel, The Times newspaper reported on Tuesday.

Rapid tests will be introduced from Tuesday at Heathrow Airport in London to allow travellers to enter countries where a negative COVID-19 test result is needed to avoid a lengthy quarantine, the newspaper said.

Passengers are required to book a test in advance at a cost of 80 British pounds ($103), the report added.

Aviation services firms Collinson and Swissport have set up rapid-testing facilities for outbound passengers at Heathrow, the newspaper said.

The testing facilities will initially be open for four weeks and could be extended if there is sufficient demand from passengers, the report added.

Heathrow, Collinson and Swissport did not immediately respond to the Reuters news agency’s requests for comment early on Tuesday.

Airlines including British Airways, Virgin Atlantic and Cathay Pacific are among the first to be offering the facility to passengers using Heathrow’s Terminals 2 and 5.

More than 40 million people around the world have now been diagnosed with the coronavirus and there has been a wave of new cases in Europe. Countries like Hong Kong have kept the virus in check with strict border controls and quarantines.

Children doing hazardous work has gone up in the world’s top coca producers, a US government study found.

The use of child labour has risen in cocoa farms in Ghana and Ivory Coast during the past decade despite industry promises to reduce it, academics said on Monday, largely supporting earlier findings that were questioned by both states.

The prevalence of children doing hazardous work, including using sharp tools, has also gone up in the world’s top two cocoa producers, according to the study funded by the United States government.

The levels were higher than in 2010 when companies including Mars, Hershey, Nestle and Cargill agreed to reduce the worst forms of child labour in Ghana and Ivory Coast’s cocoa sectors by 70 percent by 2020.

The two West African countries – which together produce about two-thirds of the world’s cocoa – had both questioned the methodology used in an earlier version of the report prepared by researchers from the University of Chicago and seen by Reuters News Agency in April.

Ghana again questioned the data in the new report, released on Monday after the US Department of Labor appointed a group of independent experts to conduct a review.

Mars said in a statement that it had committed $1bn to a responsible sourcing strategy and called for legislation to address the root causes of child labour on West African cocoa farms.

Hershey and Nestle referred Reuters to the World Cocoa Foundation (WCF) industry group. Cargill did not respond to a request for comment.

Monday’s report cut the estimate of the number of children currently working in cocoa production in the two countries to 1.56 million, from more than two million in the April study, saying it had changed the ways it weighted its data. It did not give comparative totals from 10 years earlier.

But it said the proportion of children from agricultural households in cocoa-growing areas that are engaged in child labour in the cocoa sector across Ivory Coast and Ghana had increased to 45 percent in 2018/19 from 31 percent in 2008/09.

The corresponding levels for hazardous work had risen to 43 percent from 30 percent, it added.

It added that rates of child labour had stabilised since the last survey in 2013/14 and school attendance in cocoa-growing areas had risen even as cocoa production surged.

WCF president Richard Scobey said the report showed child labour remains a persistent challenge but that government and company programmes to reduce it were making a difference.

“Targets to reduce child labour were set without fully understanding the complexity and scale of a challenge heavily associated with poverty in rural Africa and did not anticipate the significant increase in cocoa production over the past decade,” he added in a statement.

The International Cocoa Initiative (ICI), a foundation backed by industry and civil society, said what it called past sampling errors made it difficult to draw accurate comparisons over time.

Ghana’s government was quoted in Monday’s report questioning the reliability of the figures that showed a reduction in the number of child labourers from the April estimate, while maintaining a similar prevalence rate.

“This raises eyebrows about the reliability of the findings for any meaningful policy formulation and implementation,” Ghana’s ministry of employment and labour relations said.

Ivory Coast welcomed the revised results and both countries reiterated their commitment to eradicating child labour in cocoa farming.

US legislators have criticised the industry and US customs authorities asked cocoa traders earlier this year to report where and when they encounter child labour in their supply chains.

Military exercises set to take place in Bay of Bengal and Arabian Sea are likely to upset China.

Australia will take part in large-scale military exercises off the coast of India next month that will bring together a quartet of countries concerned by rising Chinese influence.

India, Japan, the United States and – for the first time since 2007 – Australia will take part in this November’s Malabar naval exercise, a move that is likely to lead to protests from China.

Australian Defence Minister Linda Reynolds said late on Monday that the drills were about  “demonstrating our collective resolve to support an open and prosperous Indo-Pacific” – a allusion to countering China’s power.

India’s Ministry of Defence said the naval drill would take place in the Arabian Sea and the Bay of Bengal, which has been a hotspot for Indo-Chinese strategic competition.

India and China have poured tens of thousands of troops into a remote Himalayan border zone since fighting a pitched battle in June in which 20 Indian troops and an unknown number of Chinese soldiers were killed.

The so-called “Quad” has been touted as a means of countering Chinese influence – including a decades-long investment in modernising its army.

But the grouping has often faltered amid disagreements about how much to confront, contain or engage Beijing.

A renewed push to develop the Quad into a formal counterbalance to China included talks between foreign ministers in Tokyo earlier this month.

At that meeting, US Secretary of State Mike Pompeo called on Asian allies to unite against China’s “exploitation, corruption and coercion” in the region.