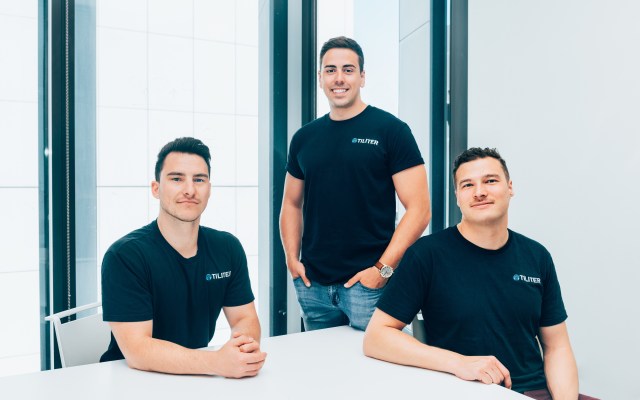 Tiliter, an Australian startup that’s using computer vision to power cashierless checkout tech that replaces the need for barcodes on products, has closed a $7.5 million Series A round of funding led by Investec Emerging Companies.

The 2017-founded company is using AI for retail product recognition — claiming advantages such as removing the need for retail staff to manually identify loose items that don’t have a barcode (e.g. fresh fruit or baked goods), as well as reductions in packaging waste.

“Some objects simply don’t have barcodes which causes a slow and poor experience of manual identification,” says co-founder and CEO Martin Karafilis. “This is items like bulk items, fresh produce, bakery pieces, mix and match etc. Sometimes barcodes are not visible or can be damaged.

“Most importantly there is an enormous amount of plastic created in the world for barcodes and identification packaging. With this technology we are able to dramatically decrease and, in some cases, eliminate single use plastic for retailers.”

Currently the team is focused on the supermarket vertical — and claims over 99% accuracy in under one second for its product identification system.

It’s developed hardware that can be added to existing checkouts to run the computer vision system — with the aim of offering retailers a “plug and play” cashierless solution.

Marketing text on its website adds of its AI software: “We use our own data and don’t collect any in-store. It works with bags, and can tell even the hardest sub-categories apart such as Truss, Roma, and Gourmet tomatoes or Red Delicious, Royal Gala and Pink Lady apples. It can also differentiate between organic and non-organic produce [by detecting certain identification indicators that retailers may use for organic items].”

“We use our pre-trained software,” says Karafilis when asked whether there’s a need for a training period to adapt the system to a retailer’s inventory. “We have focused on creating a versatile and scalable software solution that works for all retailers out of the box. In the instance an item isn’t in the software it can be collected by the supermarket in approx 20min and has self-learning capabilities.”

As well as a claim of easy installation, given the hardware can bolt onto existing retail IT, Tiliter touts lower cost than “currently offered autonomous store solutions”. (Amazon is one notable competitor on that front.)

It sells the hardware outright, charging a yearly subscription fee for the software (this includes a pledge of 24/7 global service and support).

“We provide proprietary hardware (camera and processor) that can be retrofitted to any existing checkout, scale or point of sale system at a low cost integrating our vision software with the point of sale,” says Karafilis, adding that the pandemic is driving demand for easy to implement cashierless tech.

The startup cites a 300% increase in ‘scan and go’ adoption in the US over the past year due to COVID-19, as an example, adding that further global growth is expected.

It’s not breaking out customer numbers at this stage — but early adopters for its AI-powered product recognition system include Woolworths in Australia with over 20 live stores; Countdown in New Zealand, and several retail chains in the US such as New York City’s Westside Market.

The Series A funding will go on accelerating expansion across Europe and the US — with “many” supermarkets set to be adopt its tech over the coming months.

Perch raises $123.5M to grow its stable of D2C brands that sell on Amazon