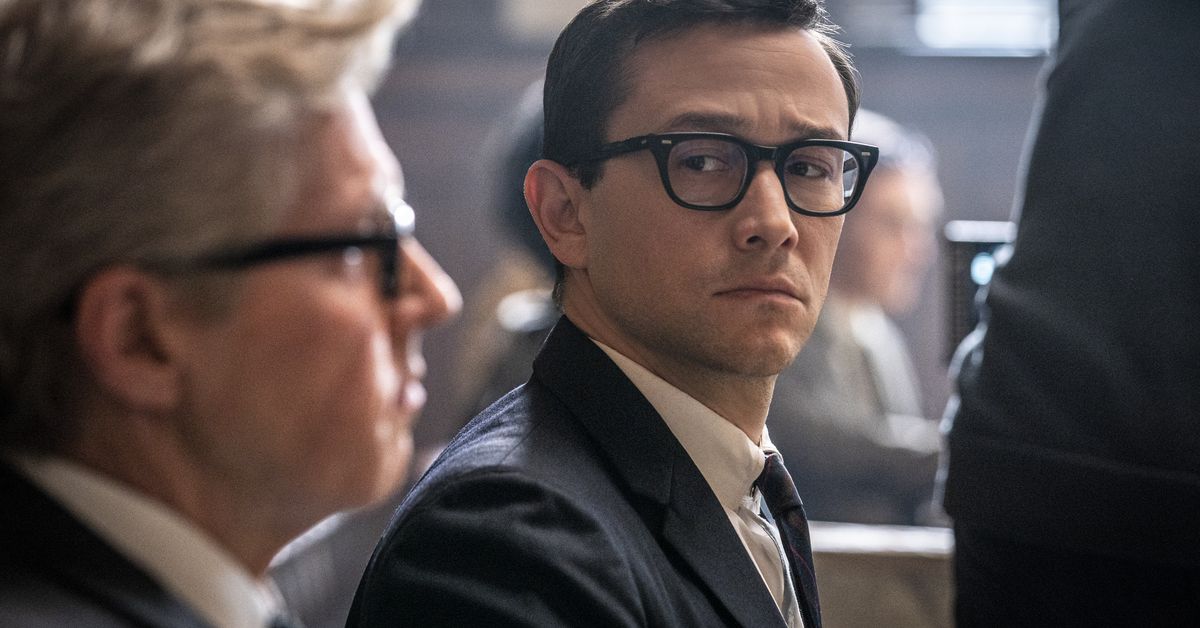 The Trial of the Chicago 7 really shouldn’t be so fun to watch. The film, which premiered on Netflix last weekend, tells the story of a historic miscarriage of justice. In 1968, during that year’s Democratic National Convention in Chicago, eight men were charged with inciting a riot when their protest against the Vietnam War led to a confrontation with police in front of the Conrad Hilton hotel. Aaron Sorkin’s film follows Abbie Hoffman, Jerry Rubin, David Dellinger, Tom Hayden, Rennie Davis, John Froines, Lee Weiner, and Bobby Seale, as they mount their defense against a biased court.

It feels timely, too, given this summer’s Black Lives Matter protests and their ongoing fallout — protesters are again being charged after demanding justice. Although in The Trial of the Chicago 7, the titular trial is only pursued because Richard Nixon’s newly installed administration decides to press charges that Lyndon Johnson’s DOJ did not recommend. It is a show trial demanded by a Republican government as retribution against citizens it deems unruly, presided over by a judge who’s transparently partisan. The phrase “the Radical Left” is used by the prosecution, and police brutality comes front and center. Crowds chant that “the whole world is watching” — although it’s hard to tell, in the end, because the film is laser focused on its subjects.

The Trial of the Chicago 7 is also a Sorkin movie, which means it’s a drama with expert pacing, crackling dialog, and a worldview so white and male you can just feel how eagerly it wants to lecture you. (It’s also very funny.) But because it’s peak Sorkin, his stylistic tics are on full display. A pivotal moment in the film’s final act, for example, actually hinges on one character’s grammatical critique of another’s quote. By now Sorkin has earned his reputation as a compelling filmmaker with comically consistent shortcomings. His legal dramas are whirlwinds of oratory that use words like bullets in a mob movie, and his politics are so resolutely centrist you could parody them, as comedian / podcaster Kevin T. Porter has, simply by juxtaposing scenes of his latest work against his previous work. The joke is simple: Aaron Sorkin repeats himself all the damn time.

But as the saying goes, broken clocks can occasionally be useful if you happen to look at them at the right time. In The Trial of the Chicago 7, Sorkin has found a subject that amplifies his well-worn strengths (chatty indignation, a gift for reduction) and minimizes his equally loud weaknesses (his awful writing of women, his penchant for liberal fanfiction). The movie is good: it’s propulsive and fun and cathartic, a pop history with good footwork and a great right hook, taking aim at targets worthy of its audience’s scorn. Even so, it’s not quite enough. The film is positioned as something timely and vaguely heroic, but its shortcomings mean the film runs out of gas right when it counts.

The main problem: despite its likable heroes and clear villains, The Trial of the Chicago 7 cannot bring itself to indict the system that turns the wheels of its story. The film establishes the trial as a vindictive act, but it launders that tale of political retribution through Joseph Gordon-Levitt’s performance as federal prosecutor Richard Schulz. In the film, Schulz is cast as an honorable man attempting to discharge his duties honorably, a reassuring presence when contrasted with the outrage-inducing Judge Julius Hoffman (Frank Langella).

Of course both of their goals are the same: they want to lock up American protesters. It’s part of a larger fantasy, one that resolutely believes there are good people on both sides of the aisle, even if they have some truly awful goals.

More egregiously, Bobby Seale’s story is truncated. In the non-Sorkin version of history, Seale didn’t have a lawyer and, in fact, had been unconstitutionally denied one for days. After his repeated demands for a lawyer irritated Judge Hoffman, the judge had Seale bound and gagged in the courtroom for days. Sorkin doesn’t soft-pedal that particular horror, but he does abbreviate it. In The Trial of the Chicago 7, Seale (played with furious restraint by Yahya Abdul-Mateen II) is only shown bound and gagged once, for the film’s climax.

Softening Seale’s courtroom treatment is the kind of adaptation choice that makes you wonder who the film thinks its villain is. Gag a man for one day, and maybe the man presiding over an individual courtroom is the bad guy. But if it happens for days, it becomes clearer that the whole damn system is broken.

This strange reticence to address institutions is also apparent in the film’s nonexistent examination of the police. While the movie is frank in its depiction of a protest as a complicated event involving large crowds, high passions, and brutal cops — badges are covered, citizens are violently beaten, and escalation is the only tactic employed — the film treats the actions of law enforcement as a natural occurrence, like a thunderstorm. It’s like Sorkin thinks nobody was responsible.

That choice also feels in line with Aaron Sorkin’s work on The West Wing or The Newsroom. Those shows make the argument that the system will eventually course-correct, and that while it can be momentarily co-opted by bad actors, the good guys will win in the end. Which, to put it another way, is activism for the wealthy and the comfortable. People who can see and say that something’s wrong, but who can also ignore their own complicity.