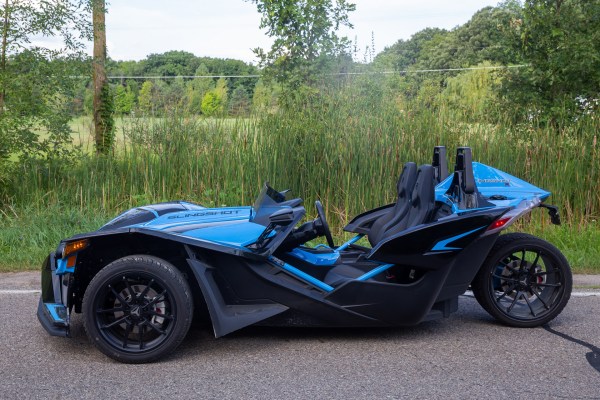 The Polaris Slingshot has always wowed. Three wheels, open cockpit, and a design reminiscent of the Batmobile. It draws a crowd and is a blast to drive.

I spent several weeks in the reworked Polaris Slingshot. The company just unveiled a new version that is finally available with an automatic transmission. Past versions were limited to a standard transmission, radically limiting the 3-wheeler’s market to those who can drive a stick. But now, with a slushbox, the Slingshot is ready for the masses.

I just wish a gas engine didn’t power the Slingshot.

The Slingshot is a thrilling ride. Is it like a motorcycle? Not really. Driving and riding in the Slingshot is akin to a go-kart or side-by-side ATV. The noises and feels are similar. It shifts hard, revs to infinity, and the wind is always in your face. It’s a blast.

Let’s get this out of the way: The Slingshot is not fast. Sure, it’s quick for its size, but it’s slower than it looks.

Thrills can be had even without breakneck speed. Without doors or a top, the Slingshot offers a driving experience offered in few vehicles.

Once warmed up, the Slingshot is eager to please. The tach goes to 10k and redlines around 8,500. Mashing the go-pedal sends the needle soaring and the rear tire screeching. And off you go.

The Slingshot was seemingly designed to power slide through corners. With the power going only to the single rear tire, the Slingshot easily loses traction, allowing for dramatic slide slides.

The thrilling ride makes up for the lack of raw speed. What are normally mundane drives are elevated to mini adventures. That is if you let the Slingshot warm up a bit.

She’s a cold-hearted lady, an uncle used to proclaim about his early eighties red Chevy Custom Deluxe pickup. This truck hauled as long as you gave the lady some time to warm up. The same thing is true with the Slingshot. Mass the gas pedal after just starting it up, and you’ll be greeted with shifts as rough as a dirt road.

My first impression of the new Slingshot was not a good one. I unloaded the Slingshot from the delivery semi, hopped in, and floored it. A long second later, as the transmission shifted from first to second, I discovered this was a bad idea. I immediately thought the Slingshot’s transmission is seemingly controlled by someone changing gears with a sledgehammer.

During my first drive, I concluded the new automatic Slingshot to be terrible before reaching the top gear. I was wrong. Once warm, the Slingshot improves but still lacks the shifting refinement of even the most basic automatic car.

Even when warmed up, shifts in traffic are clunky and hard. When the driver can power through each gear, shifts on the open road are better but still rough.

The transmission feel is my main concern with the Slingshot. Adding an automatic option opens the door to new buyers, but buyers must understand that the Slingshot is more ATV than a car.

Want a refined open-top roadster? Get a Mazda MX-5. Want a thrilling open ride? The Slingshot is a great option.

Polaris introduced the Slingshot in 2014, and I was lucky enough to drive one of the first in the country. That version was powered by a General Motors four-cylinder engine that provided ample power for the small frame. This time around, Polaris used its own four cylinder and mated it with an automatic gearbox.

The Slingshot in this new form is still thrilling, but the lackluster gearbox erases some of its potential and makes a case for an electric Slingshot.

Much of my hesitation about the automatic Slingshot would be erased if an electric motor powered the vehicle.

One, with an electric powertrain, the vehicle would dump the lackluster automatic transmission in favor of a direct drive system. It would still be accessible to the target market and yet gain a better driving experience. With the electric system, the Slingshot would be quicker off the line and around corners. It would be fast while still thrilling.

Two, the Slingshot doesn’t make a pleasant noise. Muscle cars deserve an exhaust note that expresses the gravitas of the motor. The Slingshot is not a muscle car, and the current exhaust note can only be described as being similar to an obnoxious go-kart. I spent much of my time in the Slingshot cruising through Michigan’s corn-lined back roads. I could smell the fresh corn while the sun beat down on my face. I love a loud exhaust as much as any dummy, but as I was driving through those backroads, I wished the Slingshot didn’t produce such a racket. An electric powertrain would improve the experience of the open-top machine.

Of course, Polaris probably will not heed my electrification advice. I doubt it’s possible to make the Slingshot electric and maintain the same $30,000 price. A boy can still dream.

The Slingshot is a lot of fun, and the fun comes at a cost. In the end, with the crummy automatic transmission limits the appeal of the Slingshot. Even in the best circumstances, shifts are rough and off-putting and not up to par for passenger vehicles. ATV enthusiasts can probably live with the shifts; everyone else should cross-shop the Slingshot with something like a Mazda MX-5, or even a used BMW Z3. Or, better yet, learn a life-long skill and learn to drive a stick shift, and buy the Slingshot with the standard transmission.

Adding an electric powertrain to the Slingshot would considerably improve the vehicle. It would likely be faster and more enjoyable to drive since a smooth, direct-drive sensation would replace the hard shifts.