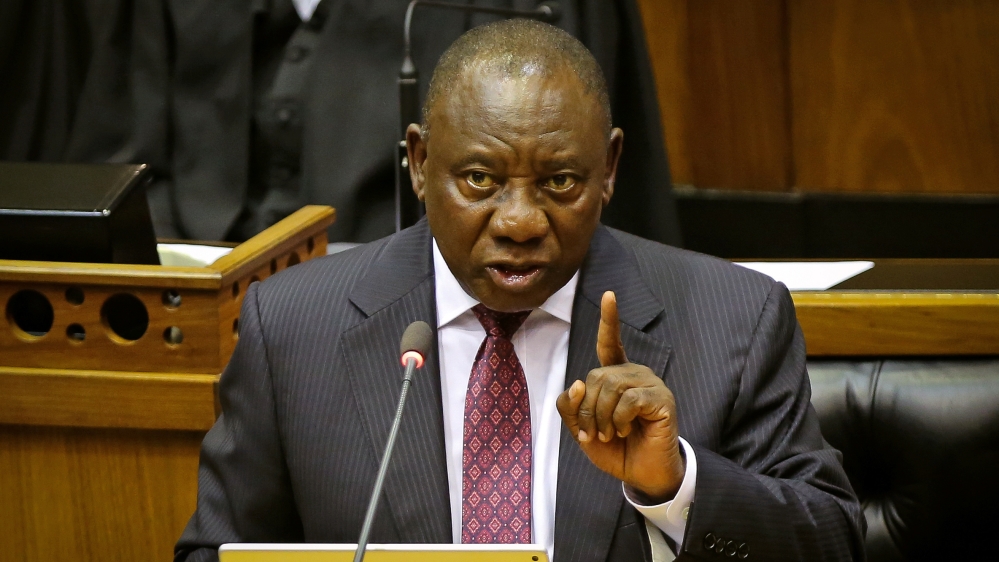 President Cyril Ramaphosa rejects claims by pressure groups that a spike in attacks on farms is ‘ethnic cleansing’.

His appeal came after a group of mainly white farmers stormed a court on Wednesday during the hearing of two Black suspects accused of killing a 22-year-old farm manager.

The lead instigator of the rioters, Andre Pienaar, 52, was subsequently jailed and charged with terrorism on Friday.

Ramaphosa, in his weekly newsletter to the nation, strongly refuted claims that farm attacks were racially motivated.

He instead characterised the attacks as a sad reminder that the country was still recovering from its dark past under the apartheid regime, which ended in the early 1990s.

Contrary to the irresponsible claims of some lobby groups, killings on farms are not ethnic cleansing. They are not genocidal. They are acts of criminality and must be treated as such

“We would be naive to assume that race relations in farming communities have been harmonious since the advent of democracy,” Ramaphosa wrote.

“Unless this is addressed in an open and honest manner, unless we are prepared to engage in dialogue, this will remain a festering wound that threatens social cohesion.”

After condemning the murder of the young farm manager in the Free State province last month, Ramaphosa said the spectacle of white farmers storming a court to attack two Black suspects “opened up wounds that go back many generations”.

The incident showed “just how easily the tinderbox of race hatred can be ignited,” he said.

The president asked all South Africans to resist any attempts to use crime on farms to mobilise communities along racial lines.

Murders on farms are an explosive issue in South Africa, where some white minority activist groups promote the idea that they are victims of a “white genocide” that aims to force landowners to flee.

There are about 37,000 white farm operators or managers in South Africa, according to 2017 census figures.

Roughly 70 per cent of privately owned farmland in South Africa is owned by whites, who make up less than 9 percent of the country’s population of 58 million.

“The majority of victims of violent crime are Black and poor, and it is young Black men and women who are at a disproportionately greater risk of being murdered,” Ramaphosa said.

South Africa has a high murder rate – in the 12 months up to April, police statistics show 21,325 murders, of which only 49 were white farmers.

Nevertheless, claims of a “white genocide” in South Africa have gained traction among white supremacist groups across the world, and in 2018 they even caught the attention of US President Donald Trump, who in a tweet pledged to investigate South African farm murders.

“Contrary to the irresponsible claims of some lobby groups, killings on farms are not ethnic cleansing. They are not genocidal. They are acts of criminality and must be treated as such,” Ramaphosa said.

“The claim that violent crime on farms is part of an orchestrated campaign by Blacks to drive white farmers off their land is simply not borne out by fact,” Ramaphosa said.

The government is preparing to expropriate white-owned land without compensation, as part of an effort to redress economic inequalities that remain stark a quarter of a century after the end of apartheid.

Libya’s warring sides have signed an agreement for “a permanent ceasefire in all areas of Libya”, the United Nations Libya mission said in a Facebook post, showing live video of the ceremony to sign the agreement.

The UN on Friday said the two sides in the Libyan military talks have reached the “historic achievement” with a permanent ceasefire deal across the war-torn North African country.

After mediation led by UN envoy Stephanie Turco Williams this week, the 5+5 Joint Military Commission reached what the UN called an “important turning point towards peace and stability in Libya”.

Details were not immediately available, but the two sides were taking part in a signing ceremony in Geneva on Friday morning.

President Danny Faure, in power since 2016, is facing voters for the first time in the three-day election.

Voting is under way in presidential and parliamentary elections in Seychelles, with President Danny Faure, in power since 2016, facing voters for the first time.

Polling stations opened on Thursday for a three-day election as the Indian Ocean archipelago nation is expected to see its tourism-dependent economy contract by 14 percent this year, according to ratings agency Fitch, due to the coronavirus pandemic.

The contraction would reverse some fragile progress made since the government defaulted on its debt in 2008 and sought an International Monetary Fund (IMF) bailout.

The same party has been in power since 1977. Faure was previously vice president and became president when his predecessor resigned after a constitutional amendment was passed limiting presidents to two terms.

Despite the economic hardship, Faure is viewed as likely to retain power, in part because the opposition is divided.

An opposition coalition captured parliament in the 2016 election, but has since split. The leader of one its two parties told supporters to vote for the governing party after the electoral commission rejected his own presidential bid.

Walter Jeannevole, 45, said on Thursday he had cast his ballot for Faure.

“I trust that he will help the economy back on its feet and work for all Seychellois, like he is doing now.”

Faure’s two challengers – Wavel Ramkalawan, who has unsuccessfully contested the presidency since 1998, and Alain St Ange, a former tourism minister – have both promised voters that if elected, they will increase the monthly minimum wage of 5,800 Seychellois rupees ($318).

“I see Ramkalawan struggling to fight for justice for the country and now is the time to vote for him and make him our president,” said a Ramkalawan supporter who declined to give his name.

Some voters in the English River district of Mahe island complained on Thursday they had to wait for more than six hours to cast their vote because there were too few voting booths.

There are about 74,600 voters out of a population of 100,000. Polling is spread over three days and the results are expected on Saturday.

Here’s how Apple imagined AirTags would work one year ago