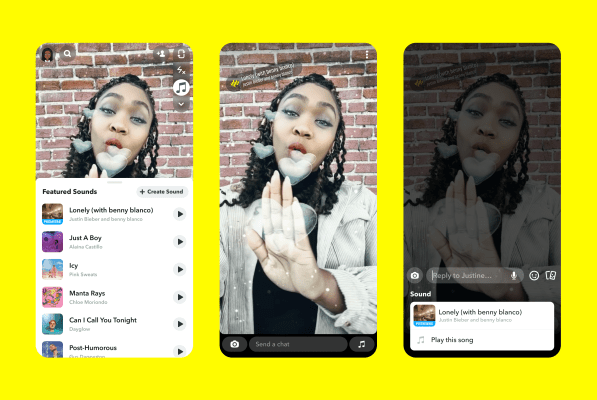 Snapchat this summer announced it would soon release a new music-powered feature that would allow users to set their Snaps to music. Today, the company made good on that promise with the launch of “Sounds on Snapchat” on iOS, a feature that lets users enhance their Snaps with music from curated catalog of both emerging and established artists.

The music can be added to Snaps either pre or post capture, then shared without any limitations. You can post it to your Story or share directly with friends, as you choose.

When users receive a Snap with Sounds, they can then swipe up to view the album art, the song title, and the name of the artist. There’s also a “Play This Song” link that lets you listen to the full song on your preferred streaming platform, including Spotify, Apple Music and SoundCloud.

This differentiates Snapchat’s music feature from rival TikTok, where a tap on the “sound” takes users to a page in the app that shows other videos using the same music clip. Only some of these pages also offer a link to play the full song, however.

To kick off the launch of the new Snapchat music feature, Justin Bieber and benny blanco’s new song “Lonely” will be offered as an exclusive in Snapchat’s Featured Sounds list today.

“Music makes video creations and communication more expressive, and offers a personal way to recommend music to your closest friends,” notes the company, in announcement about the feature’s launch.

Snap had said in August it would begin testing the new music feature and detailed the deals that made the addition possible.

The move to introduce a music feature is meant to counter the growing threat of the ByteDance-owned TikTok app, which has popularized short-form video sharing with posts set to music from a large catalog.

Though TikTok’s future in the U.S. remains uncertain due to the ever-changing nature of the Trump administration’s TikTok ban (and an election that could upset those plans), it still remains one of the top U.S. apps, with around 100 million monthly active U.S. users as of August. (TikTok is currently engaged in a lawsuit to challenge its ban, so the app remains live today.)

Social media companies have capitalized on the chaos surrounding a possible TikTok U.S. exit to promote their alternatives, like Triller, Dubsmash, Byte, and others, including, of course Instagram Reels.

Snapchat, meanwhile, touts its traction with a younger user base as its new music feature goes to launch.

In the U.S., Snapchat now reaches 90% of all 13-24 year-olds, which the company notes is more than Facebook, Instagram, and Messenger combined. It also reaches 75% of all 13-34 year-olds and, o average, more than 4 billion Snaps are created every day.

The feature is live now on iOS to start.