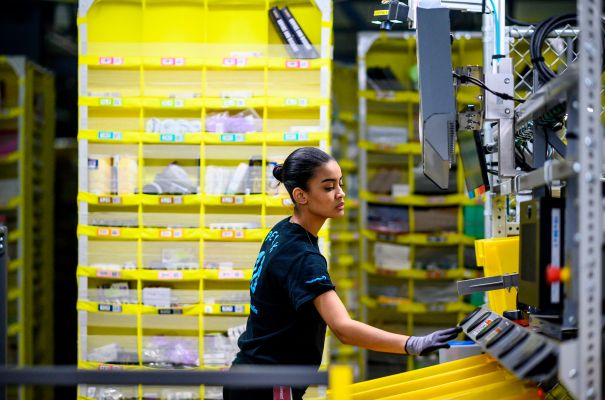 As Amazon‘s biggest shopping day of the year approaches, a new report reveals that the company’s investments in automation and safety have not stemmed surging numbers of serious injuries in the company’s warehouses and fulfillment centers.

Even as Amazon spends tens of millions on new robotics and technologies to automate its warehouses, workers are still paying the price with more than 14,000 serious injuries — requiring days off or job restrictions — reported in fulfillment centers in 2019, according to a report from Reveal.

Overall, the company saw 7.7 serious injuries per 100 employees, a number that’s 33% higher than it was four years ago and double the most recent industry standard, despite significant investments and claims that safety is improving at its facilities, the report said.

A document dump from the Center for Investigative Reporting given to Reveal, internal safety reports and weekly injury numbers from Amazon’s network of national fulfillment centers shows that Amazon has misled the public about its safety record. And that the company’s biggest shopping days — during Prime week and the long holiday season — are the most dangerous for its workers.

In a statement, Amazon called Reveal’s report “misinformed” and quibbled over the terminology, while claiming that “we continue to see improvements in injury prevention and reduction” through a variety of programs, though documents in the report suggest otherwise.

Bulletins sent out every month reveal a grim tally of injuries and safety problems, problems that the company was well aware of. Updates marked “Privileged & Confidential” and reportedly obtained by Reveal indicate that the company has failed to hit safety targets. Despite its intentions to reduce injury rates by 20% in 2018, rates rose. In 2019, when the company decided to try and lower its injury rates by a more modest 5%, the number of injuries still went up.

This isn’t the first time that Amazon has had its woeful worker safety record revealed by Reveal. Last year, the company had the covers pulled off of its alleged work with Indiana state officials to cover up a workplace safety violation that resulted in a man’s death.

And the injury rates are the highest at some of the factories that are closest to the company’s international headquarters, the Reveal report showed. Roughly an hour away from Amazon’s Seattle headquarters, in the town of Dupont, Washington, is one of Amazon’s most dangerous facilities, according to Reveal. The BFI3 warehouse saw 22 serious injuries for every 100 of the company’s workers at the warehouse.

Workers in these factories are required to hit certain production quotas that increase every year, despite investments in automation designed to reduce worker stress, according to company statements. A computer system, which tracks how many items employees scan every hour, is used to determine who needs to be flagged for not hitting targets. Those that fall too far behind are fired, according to Reveal. And the robots that were supposed to make their jobs easier, instead demanded that they increase the speed of their packing as much as fourfold.

“We vastly underestimated the effects it was going to have on our associates,” a former safety manager told Reveal. “We realized early on there was an issue. It was just – you’re already moving that way at light speed, so how do you take a step back and readjust?”

Even while the toll the robots were taking became clear to warehouse managers and supervisors, Amazon’s top executives, like Jeff Wilke, continued to tout the company’s automation investments.

We’ve created more than 300,000 jobs in our fulfillment centers even as we’ve deployed robots alongside our people. What some folks may not know is that the robots make those jobs better and safer. pic.twitter.com/nEmjEnDKCA

What Amazon’s own data showed, according to Reveal, was that the company knew the rate of serious injuries was higher at warehouses with robots than at the ones staffed by humans.

And despite Amazon’s claims to the contrary, risks appeared to increase for workers during Amazon’s highest volume periods. Prime Day in 2019 and the days surrounding it were the worst week for injuries at the company, with nearly 400 serious injuries recorded, according to Reveal’s reporting.

Amazon is also working to obscure how many of its workers get seriously injured enough to lose time at work, because the company is putting them on other “light duty” assignments, according to the Reveal study. Amazon representatives have previously said that the company does not employ this practice, but the evidence cited in the report suggest otherwise.

Injured workers who can’t perform warehouse jobs are given other tasks like tagging photos to train the company’s machine learning software. Others perform temp work for Amazon’s partners in the non-profit world, according to the Reveal report. Reassigning injured workers rather than putting them on leave is not necessarily bad, but it can be used, as it appears to have been by Amazon, to create the appearance of lower injury rates.

These historical conditions and the company’s unwillingness to reduce its bottom line interests in the name of worker health and safety can be seen culminating in the company’s response to the COVID-19 pandemic.

As Americans turned to the everything store for getting everything delivered as they sheltered in place, hundreds of workers at Amazon plants were sickened by the virus. And several died.

Ultimately Amazon invested $800 million in safety measures by the end of the first six months of the year — and three month’s into the steady march of the virus across the country. The movement from Amazon’s executive team only came after workers organized to protest their conditions.

Amazon’s thanks to these organizers? Firing one of the organizers and two other employees who supported the efforts.

Meanwhile, Jeff Bezos has made $60 billion from the surge in Amazon’s stock price.

Our unannounced Google Chromecast didn’t come with Stadia, but it sure does work