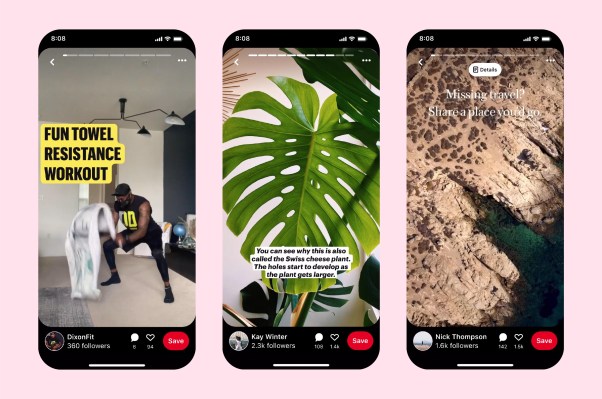 We wrote about Story Pins back in June, and apparently various versions of the format have been in the works since last year. But the company is only officially launching Story Pins in beta today, along with a number of other tools designed to help creators on the platform.

Asked yesterday how Story Pins differ from the stories we’d see on Snapchat, Instagram or any other social media platform, Pinterest’s head of content, creator and homefeed product David Temple told reporters that Pinterest’s approach is different in a few key ways.

For one thing, he noted that they’re not ephemeral, meaning that they don’t disappear after a set period of time, and can still be surfaced via search or other discovery mechanisms: “The best ideas and Story Pins remain relevant for months.”

In addition, the main interaction with a Story Pin (as with other forms of content on Pinterest) is to save it for, rather than a simple like button. And they can include lists of the necessary supplies or ingredients.

All of this, Temple argued, tilts Story Pins towards inspiration, utility and a general positive tone, as does the gradual way Pinterest is rolling this out.

“We want to be deliberate and thoughtful with the growth that we have on on here, to ensure that the tone for the content and the community remains positive,” he said.

This new feature also makes Pinterest more of a platform where creator content can be published directly, rather than simply distributed and shared after it’s published elsewhere.

To that end, Pinterest is also unveiling new creator profiles designed to showcase a creator’s published content, rather than just the Pins that they’ve saved. It’s also launching a new engagement tab and analytics dashboard, so creators can see how Pinterest users are responding to their content.

Story Pins are being rolled out to select U.S. creators, while the new analytics features are available to all Pinterest users with business accounts.

The announcement comes as Pinterest just broke its daily download record and moved to the top of App Store rankings thanks to interest in iOS 14 design ideas.

Less happily, it also comes after Pinterest employees walked out over the summer following complaints of racial and gender discrimination. Those complaints weren’t addressed directly in yesterday’s press conference, but Temple did emphasize the company’s goal of ensuring that at least 50% of creators publishing Story Pins come from underrepresented backgrounds, and that a similar diversity is reflected in the company’s “creator amplifications and marketing and editorial surfaces.”

“We can only fulfill our mission of helping everyone to create the life they want to live if everyone on Pinterest can find inspiration,” he said. “And it’s really hard to feel inspired if you don’t feel represented.”

Dear Sophie: Possible to still get through I-751 and citizenship after divorce?