Nomad’s Base Station Pro was supposed to usher in a new era of wireless chargers, promising to make the dream of a multiple-coil wireless charger a reality when it was announced nearly a year ago. After significant delays, the company has been beaten to the punch, but Nomad’s version is finally here, taking the multi-coil approach that Zens debuted (and Apple reportedly failed at entirely with the canceled AirPower) and pushes it even further with a thinner charger that can wirelessly charge up to three devices.

But while the Nomad Base Station Pro — and the Aira FreePower technology that powers it — may one day be the future of wireless charging technology, right now, the current version is just too expensive and too limited.

From the outside, the Base Station Pro looks like a larger version of the company’s existing Base Station wireless charger, with the same slim profile, smooth black leather, and gray aluminum. The only port is a USB-C plug on the back for power, with three status LEDs on the front that indicate when a device is charging.

Things are very different on the inside, though: instead of the traditional three copper charging coils, the Base Station Pro has 18 and uses Aira’s FreePower wireless charging technology. While Nomad is providing the (excellent-looking) trappings, it’s Aira’s technology on the inside that makes the Base Station Pro different from nearly every other wireless charger out there. 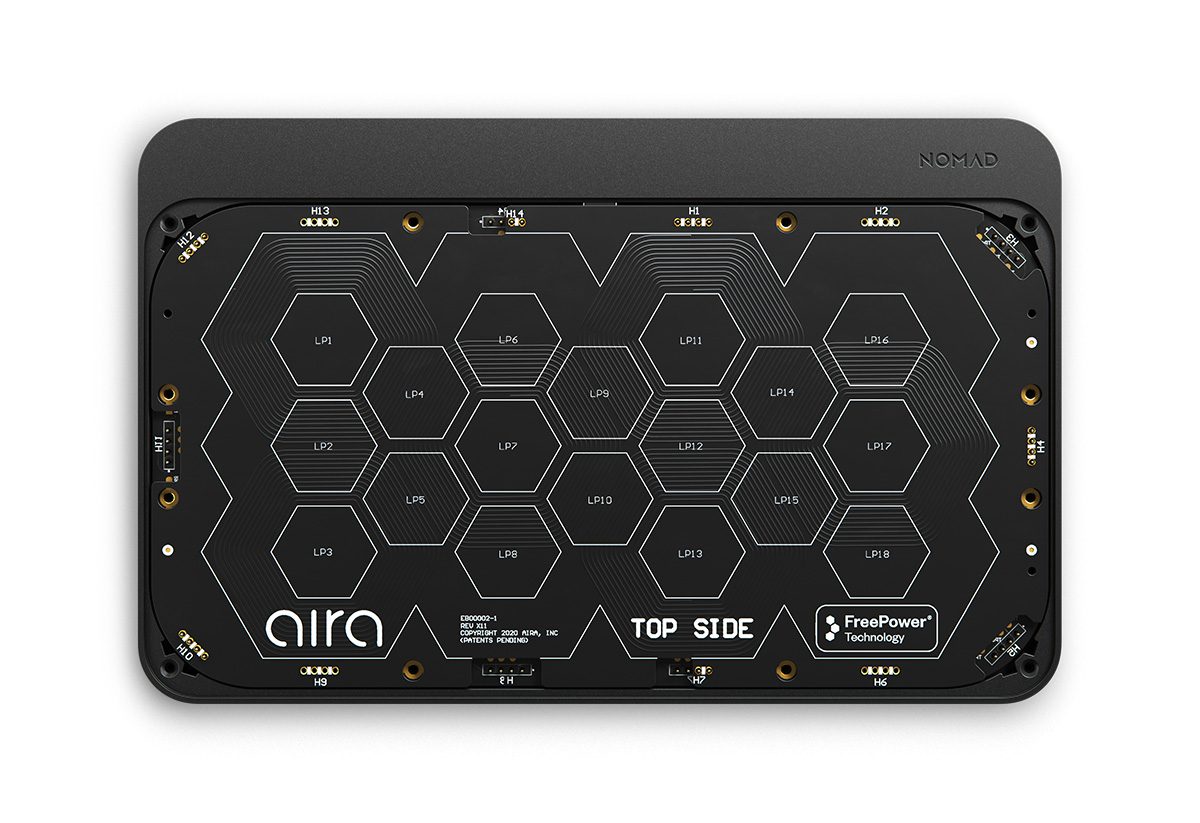 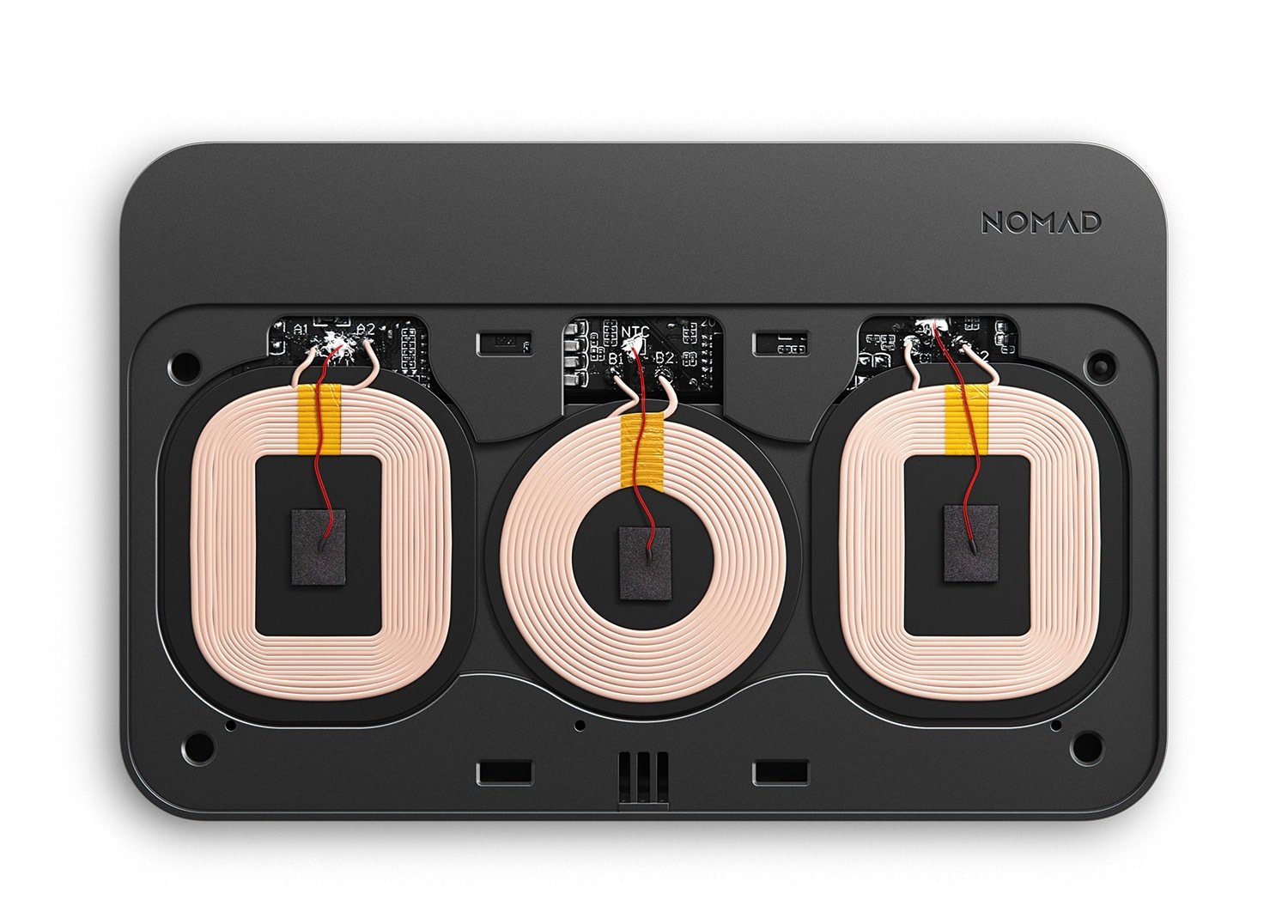 The key difference is that the Base Station Pro doesn’t use traditional coils, like most other wireless chargers (including Nomad’s multi-coil competitor, the Zens Liberty). Instead, Aira’s FreePower coils are embedded directly in a printed circuit board, allowing for a far thinner final product — the entire board for the Base Station Pro is less than 6mm thick. Aira says that the multiple coils also allow for a better charging connection that precisely aligns with a device’s own coil, resulting in less wasted energy, and therefore, less excess heat. The result is a multi-coil charger that’s just as thin as Nomad’s traditional offerings and doesn’t require any noisy fans to cool.

That may seem like a lot of effort, but the technology works really well. There’s no hunting for a “sweet spot” when placing devices on the Base Station Pro — just drop your phone, headphone case, or whatever other Qi device you’re charging on the leather surface, and it’ll charge. As I noted in my Zens review, it’s not a revolution as much as it is the way that wireless charging should always have worked.

There’s no finicky alignment needed — something that I’ve encountered as a particular issue with Nomad’s previous Base Station when maneuvering around multiple phones. In my week of testing, the Base Station Pro did even better than the Zens Liberty, which had the occasional dropout when positioning devices on the sides of the pad. (Aira and Nomad also seem to have ironed out the various hardware and software glitches that my colleague Ashley Carman experienced when trying a prototype at CES earlier this year, too.)

With the Base Station Pro, it’s practically impossible to miss when placing your phone down, unless it’s hanging so far off the pad that the charging coil isn’t over the leather charging surface anymore.

The problem is that while the Base Station Pro makes the “wireless” part a breeze, the actual “charging” is pretty limited. While it can charge up to three devices at once, it’s limited to just 5W wireless charging — the slowest standard speed — for almost any device. Nomad and Aira are only supporting a single exception, offering fast charging speeds of 7.5W for iPhones (and only iPhones). But if you have a Samsung Galaxy Note 20, a OnePlus 8 Pro, or any other device, you’re stuck without any fast charging at all.

That limitation is especially disappointing to see given the Base Station Pro’s price: $229, more than twice as much as the original $99 Base Station (which offered faster 10W charging to boot). For comparison, the Zens Liberty, the other major multi-coil charger available, costs $169.99, and while it can only charge two devices to the Base Station Pro’s three, it can support up to 15W wireless charging and offers a USB-A port for an optional Apple Watch charger or a standard cable for charging things that don’t support Qi.

The Base Station Pro is just the first device that will feature Aira’s FreePower hardware, and the company has big ambitions for future devices (which presumably won’t only be limited to Nomad). Aira imagines whole desk surfaces that are giant FreePower chargers that can power any device that’s placed on it, or a whole nightstand that will recharge all your gadgets overnight.

The Nomad Base Station Pro is an early preview of the future of wireless charging — but until the price comes down and the charging speeds go up, that future isn’t here yet.

Photography by Chaim Gartenberg / The Verge