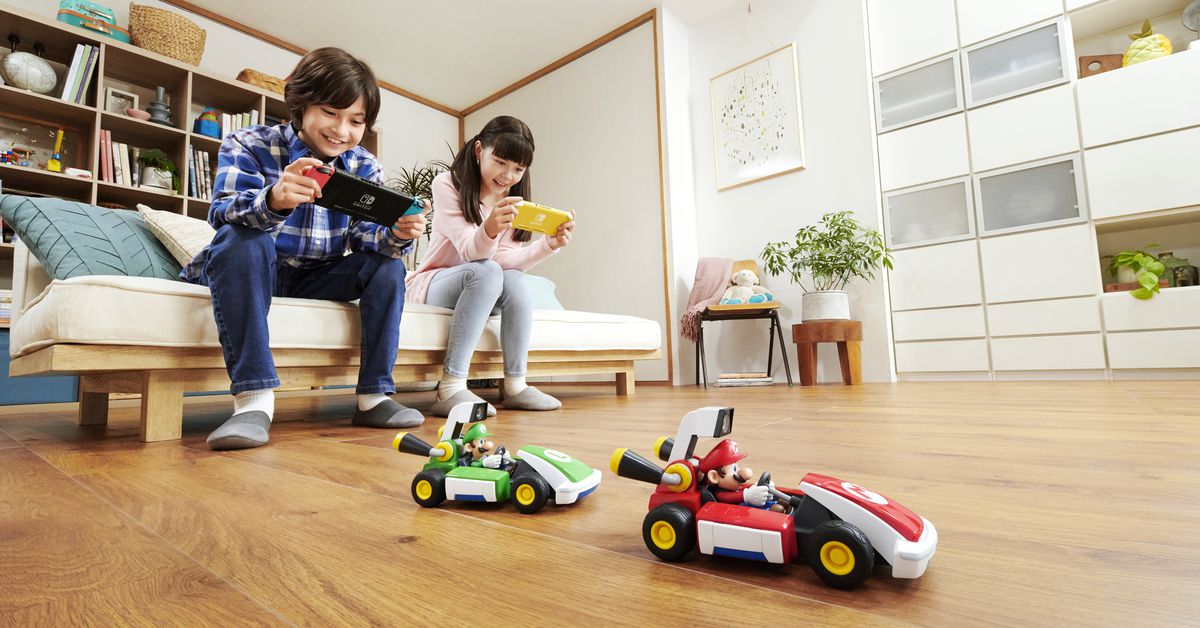 In order to enjoy playing Mario Kart Live: Home Circuit with friends, you need to embrace chaos. And I don’t mean the typical chaos associated with Mario Kart, like frustratingly timed blue shells or the nightmare of speeding through Rainbow Road. Here, the chaos is more physical — and it can be a lot of fun if you don’t mind the mess. Or the cost.

In my review of Home Circuit, my biggest issue was how inaccessible multiplayer can be. It’s not something you can enjoy out of the box. The game — which has players controlling RC karts with their Switch, while driving through a real-life obstacle course — is expensive to play with friends. Each player requires not only a physical kart, which cost $99.99 each, but also their own Switch to control it. There’s no form of split-screen play or any other kind of more approachable multiplayer solution.

That said, if you can gather up all the necessary hardware, it’s a much better experience with friends. Home Circuit multiplayer works the same as the base game. You create a course by setting up four cardboard gates around your house, which form the outline of your track. The game then augments this by adding virtual power-ups, obstacles, and visual effects to turn your living room into something out of the Mushroom Kingdom.

One of the stranger things about playing Home Circuit solo is the lack of physicality. While your kart has to deal with both real and virtual obstacles — you can bang into a coffee table and be hit by a red shell, sometimes simultaneously — your competitors don’t have the same challenge. Even when you bang into them, there’s not much of an impact; you can’t go around knocking computer-controlled characters off the track.

But that changes when there’s another real kart in the race. You can bang into each other and push your friends into IRL obstacles. In my experience, this mostly turned into a huge mess. My family built an expansive race track using small, colorful pylons to mark the edge of the road, carefully placing everything just so. After one lap, it was a disaster. Pylons were everywhere, the gates kept getting pushed around, and it wasn’t long before our cats got confused and started running through the course.

This only made things more fun. Mario Kart has always been a game about mayhem. Throw together two remote-controlled cars in a pile of plastic and cardboard, and that’s amplified even more; I can only imagine how wild things get with three or four karts. (It also makes a great spectator experience, as those not playing can watch the tiny cars zipping around and help repair the track mid-race.)

Having another person playing also helps bring out the toy-like nature of the karts. While racing is obviously the main point of playing Mario Kart, Home Circuit also has a free-roam mode where you can just drive around the house. My kids, aged five and seven, turned this into a game of hide-and-seek, using the karts’ built-in cameras to spot each other hiding around the house. They’ve actually spent far more time seeking than racing so far.

It’s not a surprise that Home Circuit is best experienced with other people. That’s the case for most games, and it’s always been true of Mario Kart. But it does make that inaccessibility stick out even more, because it really feels like you’re missing a key part of the experience if you play the game solo. It’s a lot to ask of a family to have multiple Switch units and spend $99 per car just for a fun afternoon. I’ve been having fun with it, but I can’t say it’s worth the added expense.

Here’s What Will Likely Happen on Election Day