Due to the altered schedule whereby the 2019-20 NHL season was completed quite a bit later than usual — with the Stanley Cup Playoffs lasting until Sept. 29 — free agency began on Oct. 9 this year, as opposed to the traditional July 1 starting point.

But while the key dates have shifted, the goal of free agency has not: GMs around the NHL hope to land the game-changing veteran who can boost their contention status, or bolster their core with the glue that builds championships.

Here’s our continuously updated tracker, featuring a list of every player signed from Sept. 1 onward, along with analysis on the biggest deals, and buzz on what could happen next. Note that the newest deals are at the top.

Forward Tyler Pitlick has signed with the Coyotes, agreeing to a two-year, $3.5 million contract.

Following his trade earlier this week, goaltender Matt Murray has signed a four-year, $25 million deal with the Senators.

After an impressive run in leading the Stars to the Stanley Cup Final, Anton Khudobin has re-signed with Dallas, inking a three-year, $10 million contract. Grade for the deal.

RFA forward Colin Blackwell is sticking with the Rangers, as the two sides have agreed to a two-year, $1.45 million deal.

Buddy Robinson and the Flames will be continuing their business relationship, as the two sides have agreed to a one-year, $700,000 contract.

Former Capitals starting goalie Braden Holtby has gotten off of the goalie carousel, signing a two-year, $8.6 million deal with the Canucks. Grade for the deal.

Winnipeg adds to its blue-line group, as Nathan Beaulieu has inked a two-year, $2.5 million contract.

After being bought out by the Predators, veteran forward Kyle Turris has landed with the Oilers on a two-year, $3.3 million contract. Grade for the deal.

Another rider has gotten off of the 2020 goaltender carousel, as Cam Talbot has signed with the Wild for three years, $11 million. Grade for the deal.

The King has chosen his next NHL home. Henrik Lundqvist has agreed to a one-year, $1.5 million deal with the Capitals. Grade for the deal.

A new journey begins with ONE goal in mind. I’m really excited and grateful for the opportunity to join the @Capitals
See you soon, DC!#ALLCAPS pic.twitter.com/DuShlGUwGR

Carter Verhaeghe did not get a qualifying offer from the Lightning, but his free-agent journey was not a long one: He has signed with the Panthers for two years, $2 million.

Former Golden Knights blueliner — and University of Michigan product — Jon Merrill has signed with the Red Wings for one year, $925,000.

Veteran defenseman Radko Gudas is heading to the Panthers, as he has inked a three-year, $7.5 million contract.

Forward Tyler Motte is back with the Canucks, as he has agreed to terms on a two-year, $2.45 million contract.

The Lightning will bring at least some of their free agents for 2020-21. Forward Patrick Maroon (two years, $1.8 million) and Luke Schenn (one year, $800,000) are both back to help with the efforts for another Stanley Cup.

Following his buyout earlier this offseason by the Senators, veteran forward Bobby Ryan has landed with the Red Wings on a one-year, $1 million contract. Grade for the deal.

The Lightning have placed forward Tyler Johnson on waivers. He has four years remaining on his contract at $5 million in average annual value.

Veteran forward Wayne Simmonds has elected to sign with the Maple Leafs for one year, $1.5 million. Grade for the deal.

The Golden Knights have traded center Paul Stastny to the Jets for Carl Dahlstrom and a fourth-round pick in the 2022 draft. The 34-year-old Stastny has one year remaining on a three-year, $19.5 million contract signed in July 2018. Grades for both GMs.

WE HAVE ALSO ACQUIRED CARL DAHLSTROM’S DOG WHO WE VERY MUCH LOOK FORWARD TO MEETING 😁🐶😍 pic.twitter.com/C9Y8Ki9NbY

RFA defenseman Victor Mete will not be hitting the market, as the Canadiens have re-signed him to a one-year, $735,000 deal.

Golden Knights extend a pair of RFAs for one more year, with defenseman Jimmy Schuldt and forward Reid Duke landing $700,000 contracts for 2020-21.

Penguins not ready to move on from Sam Lafferty, ink the RFA forward to two-year, $1.5 million deal.

Noah Juulsen is back with the Canadiens on one-year, $700,000 contract.

The fourth overall pick of the 2016 draft, Jesse Puljujarvi returns to the Oilers on two-year, $2.35 million contract.

Nicolas Meloche, Maxim Letunov back with the Sharks on one-year, $700,000 contracts.

Zack MacEwen remains with the Canucks on two-year, $1.65 million pact.

Defenseman Carson Soucy is back with the Wild on a three-year, $8.25 million contract.

Veteran forward Jason Spezza re-signs with the Maple Leafs for one year, $700,000.

Goaltender Brian Elliott back with the Flyers on one-year, $1.5 million pact.

Flyers ink goaltender Alex Lyon for one year, $700,000 to bolster their netminding depth.

RFA forward Michael McCarron re-signs with Predators for one year, $700,000.

NFL memo: Penalty without mask to talk to ref

Your guide to every Week 5 game, with predictions and fantasy tips 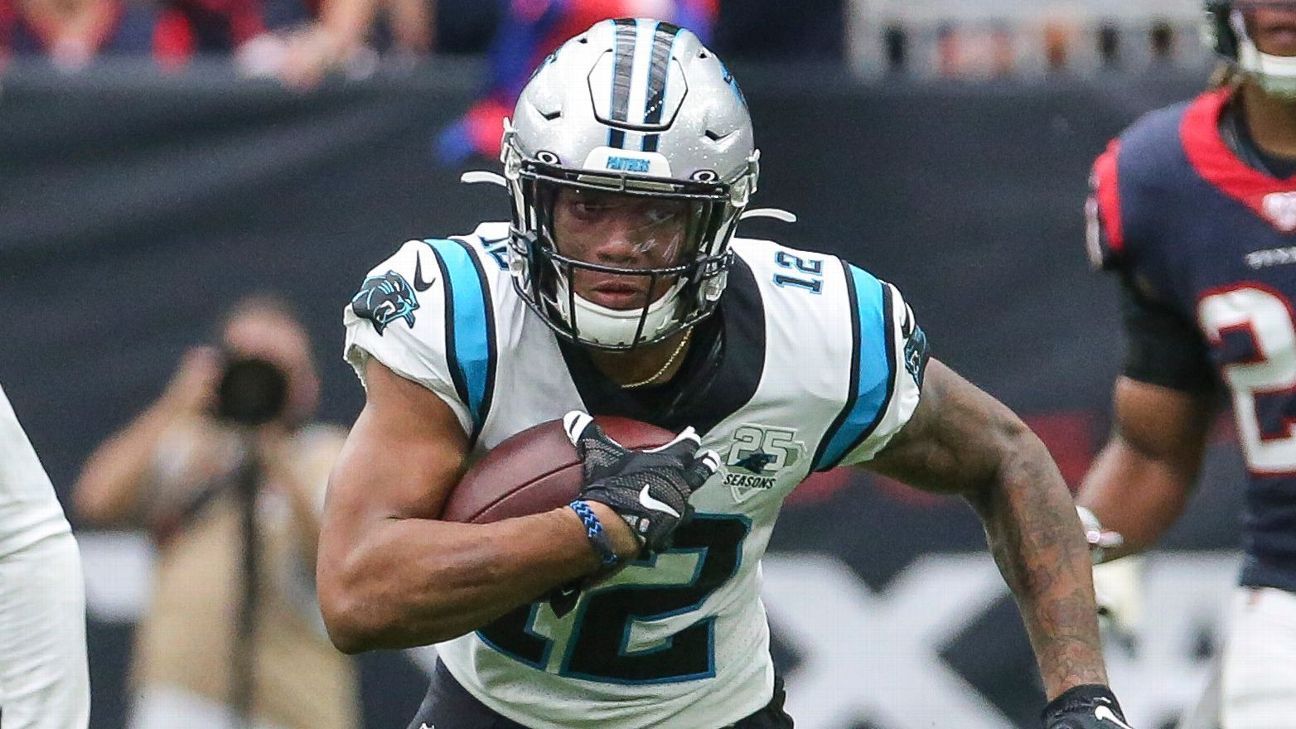 DJ Moore may have exploded past Robby Anderson to reclaim his spot as the No. 1 receiver for the Carolina Panthers on Sunday with two big first-half touchdowns against the New Orleans Saints.

The first was a 74-yard catch from quarterback Teddy Bridgewater in which the former Maryland star was 10 yards clear of any defender as the Saints had a major breakdown in protection.

The second was a 7-yard shovel pass on an end around in which Moore ran through several New Orleans defenders for the touchdown that gave the Panthers a 17-14 lead. The Saints have now allowed 17 TD passes in six games this year, and they’ve allowed 11 pass plays of 29-plus yards.

Moore entered the season as Carolina’s No. 1 receiver, but quickly was passed by Anderson, who entered this game tied for fourth in the NFL in catches with 40 and second in receiving yards with 566. Moore had 27 catches coming in today.

In the first half against New Orleans, Moore has two catches for 81 yards and two touchdowns. Anderson had three catches for 34 yards. 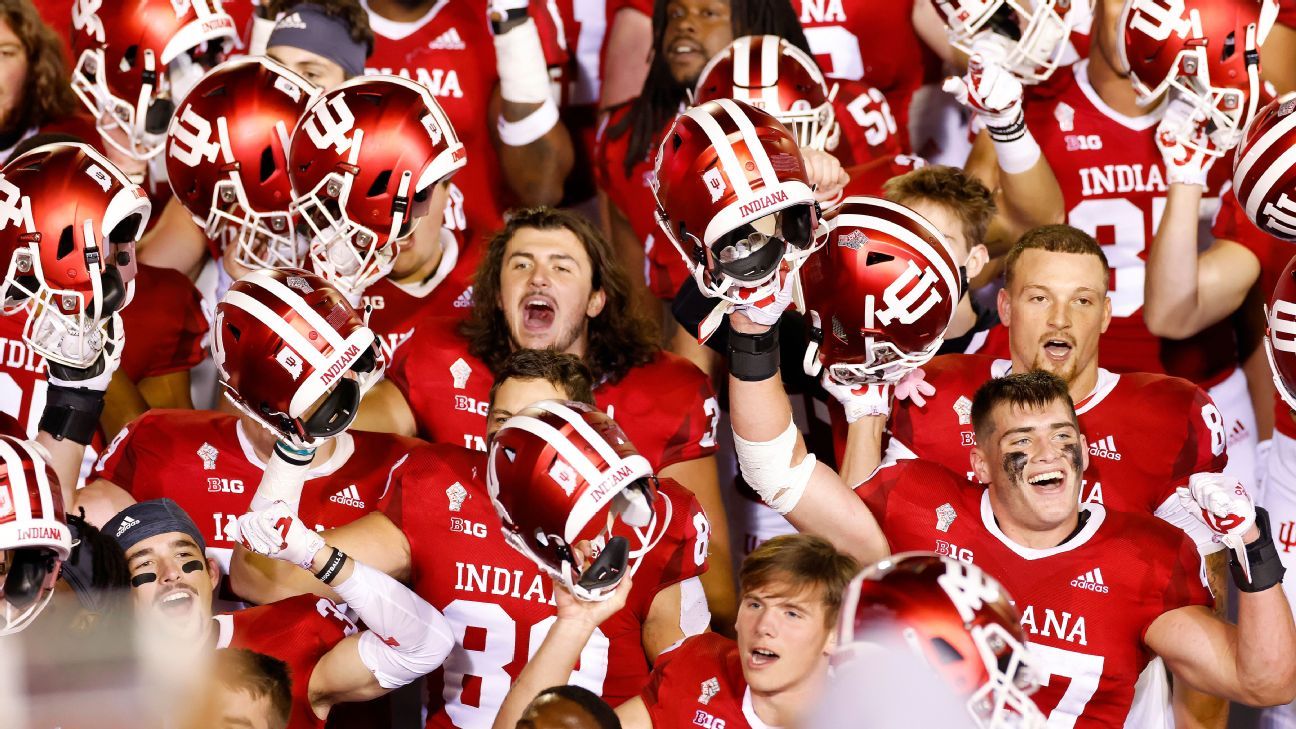 Indiana jumped into The Associated Press college football poll Sunday after pulling off the weekend’s most dramatic upset and Ohio State moved up to No. 3 following a dominant season debut.

Clemson remained a rock-solid No. 1 and Alabama was No. 2. The Tigers received 52 first-place votes and the Crimson Tide got the remaining 10.

No. 4 Notre Dame and No. 5 Georgia each slipped a spot behind the Buckeyes.

Indiana pulled off a stunner in overtime to jump into the rankings, beating then-No. 8 Penn State to earn the program’s first victory against a team ranked in the AP top 10 since 1987. The Hoosiers snapped a 25-year absence from the poll last season but stayed there only one week.

Indiana has its best ranking since 1993, when it also reached No. 17. With Rutgers coming up next week, the Hoosiers might see a longer stay in the poll than last year. Then again, the Scarlet Knights won their opener, too.

Penn State slipped 10 spots to No. 18 after losing to the Hoosiers for just the second time in 24 meetings since joining the Big Ten.

What’s up with Ohio State moving past Notre Dame after the Fighting Irish had their most impressive victory of the season, against Pittsburgh?

Remember, the Buckeyes were No. 2 in the preseason and a close second to No. 1 Clemson.

That held back the Buckeyes and some other Big Ten teams for a few weeks. Now that all the voters are including Ohio State, Wisconsin, Michigan, et al., those teams got an extra boost this week.

Wisconsin moved up five spots to No. 9, appearing on every ballot for the first time since returning to the rankings three polls ago. No. 13 Michigan also moved up five spots, though the Wolverines got a bounce from an impressive victory at Minnesota.

The other teams to move into the rankings this week are regulars.

— No. 24 Oklahoma is back after three weeks out. That is the longest run of polls that have not included the Sooners since 2009, when they were left out of the final six Top 25s.

— No. 25 Boise State made its season debut, along with the rest of the Mountain West Conference, and grabbed the final spot in the rankings. The Broncos were last ranked in the final poll of the 2019 season. Boise State has now made at least one poll appearance in 19 straight seasons, tied with Southern California for the seventh-longest active streak.

— Minnesota dropped out after getting thumped at home by Michigan.

— The Atlantic Coast Conference, which had the most teams ranked last weekend, lost two Sunday. Virginia Tech and North Carolina State both fell out after losing for the second time this season.

The only conference without representation in the Top 25 is the Mid-American, which doesn’t begin play until Nov. 4.

No. 3 Ohio State at No. 18 Penn State. The Nittany Lions didn’t hold up their end of what was set to be a top-10 matchup, but it’s still probably the toughest game on the Buckeyes’ regular-season schedule.

LANDOVER, Md. — Two plays after stopping the Dallas Cowboys on a fourth-and-1, the Washington Football Team showed, once more, what it had in receiver Terry McLaurin.

On second-and-7 from the Cowboys’ 48, quarterback Kyle Allen, with pressure coming to the left, hit the speedy McLaurin down the left side for a wide-open 52-yard touchdown pass.

McLaurin beat defensive back Trevon Diggs by at least five yards — one play after the rookie cornerback had tussled with him at the end of a play.

It was McLaurin’s first touchdown catch since Week 2 and his longest catch of the season. It’s the second longest touchdown pass of Allen’s career.

It’s McLaurin’s third career receiving TD of 50-plus yards; all have come against NFC East opponents — the first two came against the Philadelphia Eagles last season.