Most of the products included in Journalist Studio, such as Google Trends and the Fact Check Explorer, were already available elsewhere. But in addition to bringing everything together into a new suite of products, Google also announced two new tools: Pinpoint and The Common Knowledge Project.

Megan H. Chan, Google’s news ecosystems lead, demonstrated Pinpoint for me yesterday. Chan previously served as an editor and digital executive at publications like Politico and The Washington Post, and she recalled moments when reporters would get access to a large trove public records — those documents could be crucial, but it was also a huge chore to go through them.

Pinpoint is designed to make the process simpler by identifying the people, organizations and locations that are mentioned most frequently, and to make it easy to jump to each of those references. Chan noted that this should be less tedious than simply hitting CTRL-F over and over again for different terms. And because it uses Google’s Knowledge Graph technology, Pinpoint can also find group related terms, or distinguish between two similar-looking ones, such as “John F. Kennedy” and “John F. Kennedy, Jr.”

Chan added that these tools are “no replacement for a human journalist,” but they can make those journalists more effective. And she suggested that this could be useful during the fact-checking process, allowing journalists to more quickly and reliably back up their assertions with editors, rather than simply relying on their notes. 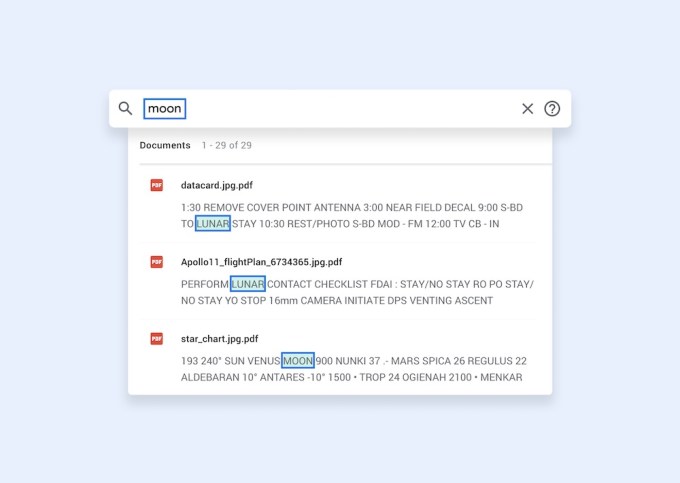 Also, because of Google’s speech-to-text capabilities, Pinpoint can be used to sift through audio as well.

Although the product is only being released publicly today, some journalists have already been using it in their reporting, for example allowing USA Today to aggregate data on COVID-19 deaths at nursing homes across the United States.

Asked whether users should feel comfortable uploading sensitive documents to the service, Chan said, “Google, we believe, has best-in class privacy and security practices, and Pinpoint is absolutely no exception.”

She acknowledged that journalists sometimes have access to documents that are “extremely sensitive” and they won’t even upload them to their own internal networks. But she argued in that most cases, Google’s security practices should be sufficient.

The Common Knowledge Project, meanwhile, allows journalists to explore a variety of public datasets (from Data Commons, which collects data sets from organizations like the U.S. Census and the CDC) and then create their own interactive visualizations, which can then be embedded in their stories.

Simon Rogers, the data editor at the Google News Initiative’s News Lab, told me that one fo the goals of the project is to encourage “data literacy” by creating defaults around how the numbers can be visualized in informative (rather than misleading) ways: “We will try not to show things in a way they shouldn’t be shown.”

All of the tools in Google’s Journalist Studio are either available for free, or journalists can sign up for a complimentary account.