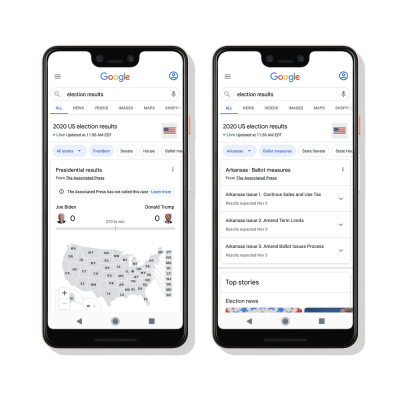 Google today announced several updates related to how it’s helping direct people to the polls, provide election results, and help people access real-time election news across its platforms and services, like Search, Assistant and YouTube. The company said it will again partner with the Associated Press (AP) to deliver authoritative information on election results on both Google Search and Assistant. It also confirmed earlier reports that it won’t run political ads on its platform after the polls close on November 3.

Axios had first reported on Google’s plans to ban political ads after election day, citing an email sent to advertisers. The email had told advertisers they would not be able to run ads “referencing candidates, the election, or its outcome, given that an unprecedented amount of votes will be counted after election day this year.”

Google confirmed the move at the time of the original report by offering a statement.

Today, Google published the details of its decision in a company blog post, saying it has chosen to enforce its Sensitive Events policy as soon as the polls close on Nov. 3, given the possibility of “delayed election results this year” and to “limit the potential for ads to increase confusion post-election.”

Ads that potentially profit from or exploit a sensitive event with significant social, cultural, or political impact, such as civil emergencies, natural disasters, public health emergencies, terrorism and related activities, conflict, or mass acts of violence

Google isn’t the only tech giant to take aim at political advertising in this heated election season. Facebook this month widened its ban on political ads, saying those ads would be blocked indefinitely after Nov. 3. Twitter made the decision to ban political ads last year.

In Google’s case, it’s calling its political ad ban a “temporary pause,” and says it’s directed towards an ads referencing “the 2020 election, the candidates or its outcome.”

The company also took the time today to note other voting and election-related initiatives it has underway, including its ongoing activities taking place in election seasons that help people find voter registration information and other election deadlines. It’s also directing users to voting locations and ballot drop boxes on Google Maps.

On YouTube, it’s pointed users to relevant election-related search results, voter registration information, and details on how to vote.

This year, Google noted it will partner with the AP to provide election results in Google Search and Assistant. The companies have worked together in the past elections, too.

Users will encounter a new election module with data provided by the AP when they either search for “election results” on Google Search or ask, “Hey Google, what are the current election results?” The data will include both federal and state level races across more than 70 languages, Google says.

YouTube, meanwhile, will feature real-time election streams from major news providers, and link to coverage on Google Search. Google News will also feature a 2020 U.S. Election section where users can follow both local and national news.

Study: 40% of escooter riders are injured on their first ride