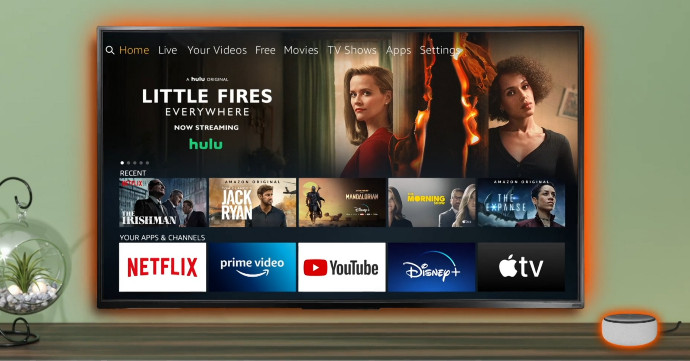 If you’ve got an Amazon Fire TV box, hate picking up a voice remote, and have a separate Alexa-enabled device like an Echo smart speaker, then I have some great news. A new update rolling out this week is adding a host of new hands-free features to the Fire TV like being able to use it to view calendars or the weather, control menus, and play music.

Although many of these smart display-like features have been available on the Fire TV before thanks to Amazon’s voice remote, what’s new is being able to access them hands-free. You’ll need to pair an external Alexa-enabled device like an Amazon Echo to get the functionality to work, however. The Fire TV Cube is the only one of Amazon’s streaming boxes to have the far-field mics to handle hands-free voice controls built into the device itself.

Turning your TV into a massive Echo Show

Although you’ve been able to pair Alexa-enabled devices with Fire TVs for hands-free control for years, its functionality has been more limited until now. It’s mainly consisted of opening apps, playing movies or TV shows, searching for content, and controlling playback.

The biggest new features will be able to turn a TV into something more akin to an Echo Show smart speaker. You can ask it to show a calendar, the weather, or a feed from a compatible internet-connected camera. There are also new navigation controls, allowing you to ask Alexa to “scroll right/left” or “go back.” Finally, Amazon is also adding more music playback features, effectively letting a smart speaker play music from a TV’s speakers.

Amazon says the new features are rolling out over the coming week to “compatible” Alexa-enabled, Fire TV, and Fire TV Edition devices (we’ve asked exactly which devices will be supported and will update if we hear back). However, Amazon says Echo Show and Echo Spot smart displays are not supported.