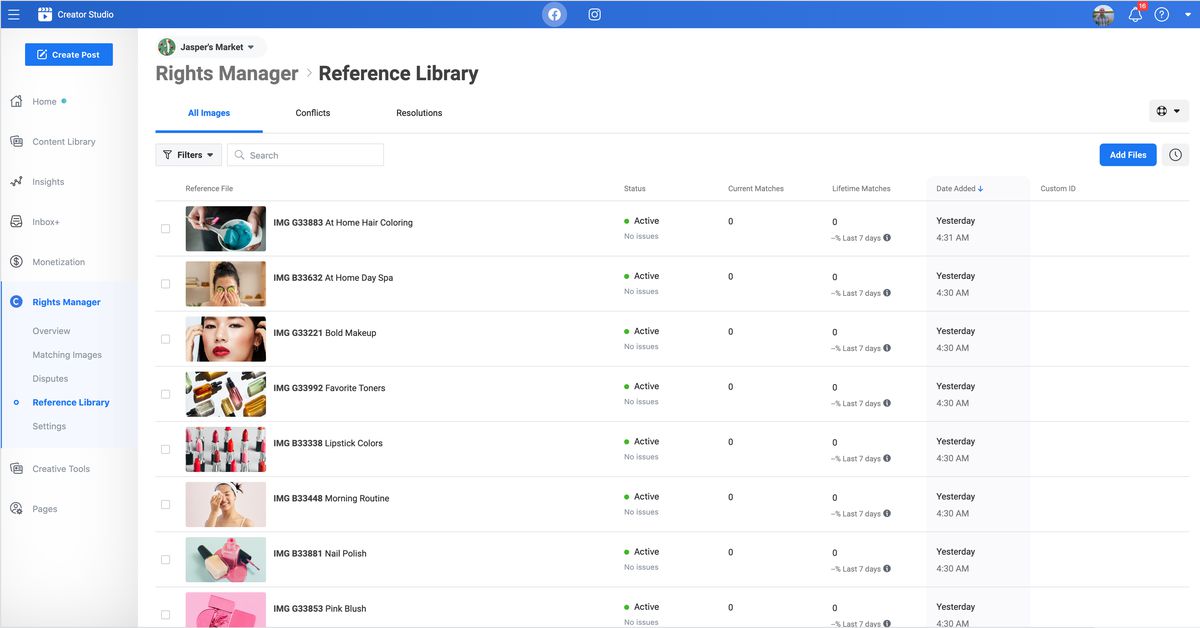 Facebook is going to let people take more control over the images they own and where they end up. In an update to its rights management platform, the company is starting to work with certain partners today to give them the power to claim ownership over images and then moderate where those images show up across the Facebook platform, including on Instagram. The goal is to eventually open this feature up to everyone, as it already does with music and video rights. The company didn’t give a timeline on when it hopes to open this up more broadly.

Facebook didn’t disclose who its partners are, but this could theoretically mean that if a brand like National Geographic uploaded its photos to Facebook’s Rights Manager, it could then monitor where they show up, like on other brands’ Instagram pages. From there, the company could choose to let the images stay up, issue a takedown, which removes the infringing post entirely, or use a territorial block, meaning the post stays live but isn’t viewable in territories where the company’s copyright applies.

“We want to make sure that we understand the use case very, very well from that set of trusted partners before we expand it out because, as you can imagine, a tool like this is a pretty sensitive one and a pretty powerful one, and we want to make sure that we have guardrails in place to ensure that people are able to use it safely and properly,” says Dave Axelgard, product manager of creator and publisher experience at Facebook, in a comment to The Verge.

To claim their copyright, the image rights holder uploads a CSV file to Facebook’s Rights Manager that contains all the image’s metadata. They’ll also specify where the copyright applies and can leave certain territories out. Once the manager verifies that the metadata and image match, it’ll then process that image and monitor where it shows up. If another person tries to claim ownership of the same image, the two parties can go back and forth a couple times to dispute the claim, and Facebook will eventually yield it to whoever filed first. If they then want to appeal that decision, they can use Facebook’s IP reporting forms.

The system defaults ownership to whoever filed first

This update could potentially upend the way Instagram works right now, with accounts often sharing the same image and only tagging the presumed original rights holder as credit. Now those rights holders can take down the post without delay. Ultimately, creators might end up having to invest in their own photography or image creation to avoid having posts taken down. This might ultimately be what Instagram wants: to become a place where original images are shared versus regurgitated. This will be especially interesting to watch with memes.

Axelgard says they’re starting with a small group to “learn more and figure out the proper way to address specific use cases like memes.”

Part of that learning process means determining how much editing can happen to an image, like a meme, before it qualifies as a “match” with a rights holder’s image. Memes, of course, are edited constantly, so Facebook needs to determine whether it’ll let people remove those memes.

Copyright on Instagram has been an issue for years, and most recently, the company said websites need photographers’ permission to embed their posts. In the past, paparazzi have sued celebrities for uploading their photos to their own accounts, too. Basically, copyright gets messy, especially on Instagram, and the Rights Manager might streamline things while also transforming the platform.

How to Fix the Pixel Buds’ Audio-Pausing Bug