Welcome back to Byte Me, our feminist newsletter that makes everyone mad <3

Sorry we missed last month’s edition! We were swamped with TNW2020 which was a gorgeous success. In the meantime, Cara and Gigi have been obsessively inhaling The Handmaid’s Tale, and Anouk fell off her bike, fucked up her foot, and then passed out on her bathroom floor.

Each month, our gloriously gifted designer, Saïna, illustrates a weird comment or tweet we receive from one of TNW’s misogynistic, or just funny, readers. This month’s comes from an aggressively feminist tweeter:

This statement is so wrong. Women cannot be equal to men. They’re superior. It was women mathematicians and programmers who sent us on the moon.

We love this energy. So much so, that we made an illustration to match:

For the past few months, we’ve been begging you all to reply to this newsletter to tell us how much you love us — and we heard nothing.

We were distraught. We even thought for a second that you might not love us. Ridiculous right? Apparently, anyone who replied to this newsletter was bounced back. We fixed it so now we’ll get your love letters. Thank you to Katrien for telling us!!!

that’s what she said: Should we talk about female politicians’ clothes?

Because we’re all magical and unique snowflakes who don’t always agree on feminist issues — and subsequently feel like we’re “bad” women — we’re going to discuss something we found online in each newsletter.

For this month’s that’s what she said, we’re discussing if we should talk about female politicians’ clothing. We’ve linked to our full discussion here, and included the TL;DR below:

Georgina: It’s kinda fun to talk about clothes — but I do also think that it’s ridiculous how much female politicians have think pieces written about their pantsuits.

Cara: Yeah, I do enjoy talking about clothes too, but the double standard of how we never talk about male politicians’ clothes is crazy. But the way most men dress is boring and I do love a power suit but not when it’s worn by a Tory.

Anouk: Actually, not sure if that’s true, at least not for Dutch politics. Our Minister of Health wore these shoes and it was national news.

Georgina: I do wonder if we talk about women’s clothes more partially because women just have way more options? Like a lot of men’s outfits are really similar — if they were allowed to express themselves with clothes in the same way women are, maybe it would also be more of a conversational topic.

You can check out the full conversation here, which discusses Kamala Harris’s Converse, Angela Merkel, and AOC’s lipstick tutorial.

Feel free to comment on the document with your thoughts, or send us an email!

the best and the worst

In this section, we ask women much smarter than us about the best and worst piece of professional advice they’ve ever received.

We recently asked Gina Rippon, an Emeritus Professor of Cognitive Neuroimaging. Rippon is an outspoken critic of misunderstandings of “the gendered brain.”

The worst
“Don’t do science – science isn’t for girls.”

tweets of the month

WHY are twentysomething women not in charge of contact tracing?? you could show my friends a photo of a random pub full of men and have their ages, occupations, probable marital status and star signs in under 30 mins! @ the government let’s GO

Men are too emotional to be president.

word of the month: LinkedIncel

To quickly refresh your memory, incels are ‘involuntary celibates,’ people (let’s face it, mainly men) who believe they can’t get laid because they’re not attractive enough. Most of them hate women. Some of them shoot up shopping malls.

An incel with a LinkedIn profile might not take it that far — they’re focused on their careers, after all — but that doesn’t mean they can’t hit on random women via Linkedin messages. 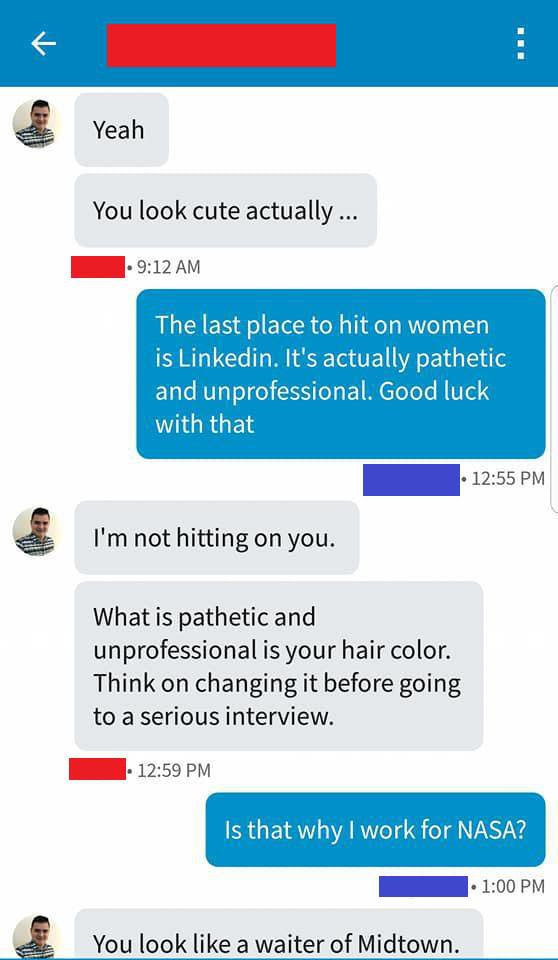 In a recent piece for Fast Company, author Katie Fiore signals a disturbing new trend on the social platform: women users are increasingly dealing with harassment and misogyny.

Fiore researched the reactions to articles posted by The Female Lead, an online platform that focuses on female leadership. She noted that,

“…many of the comments were filled with derision, marginalization and even outright hate directed at the female subject of the post. Comments from professional men whose pictures, names, and places of work were visible for everyone to see. Men who felt so comfortable with their misogyny that they were empowered to share it on a platform for professionals designed to help us advance our networks and careers.”

And the misogyny on LinkedIn isn’t just hiding in comments and DMs — it’s also in the content itself. Last week, this post landed on our feed: 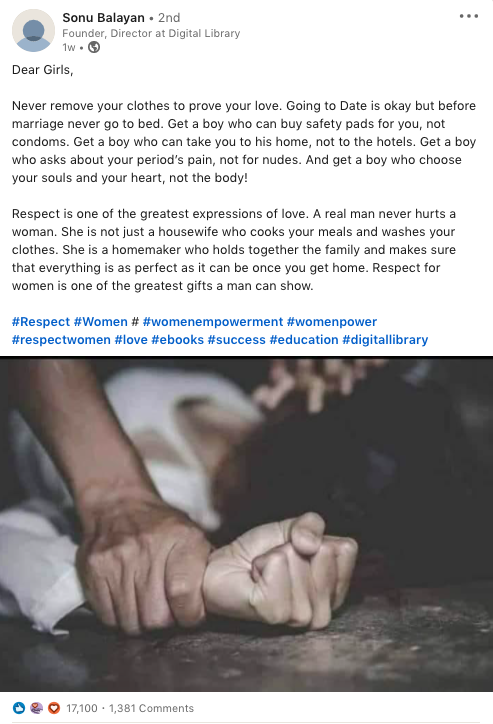 In addition to being regressive and demeaning — which, for the record, is pointed out by many readers in the comments — why is this post even on LinkedIn?

It’s pretty ironic to suggest that all women should devote their lives to homemaking; the one job you won’t find on LinkedIn. Also, what the hell are safety pads, and why would women need men to buy them?

What’s LinkedIn doing about all this? According to a recent blog post, the platform will be rolling out some ‘anti-harassment’ features this fall. Before publishing new posts, users will be reminded to respect the guidelines and keep it professional. Direct messages that are deemed inappropriate by LinkedIn’s algorithm will show up with a warning: 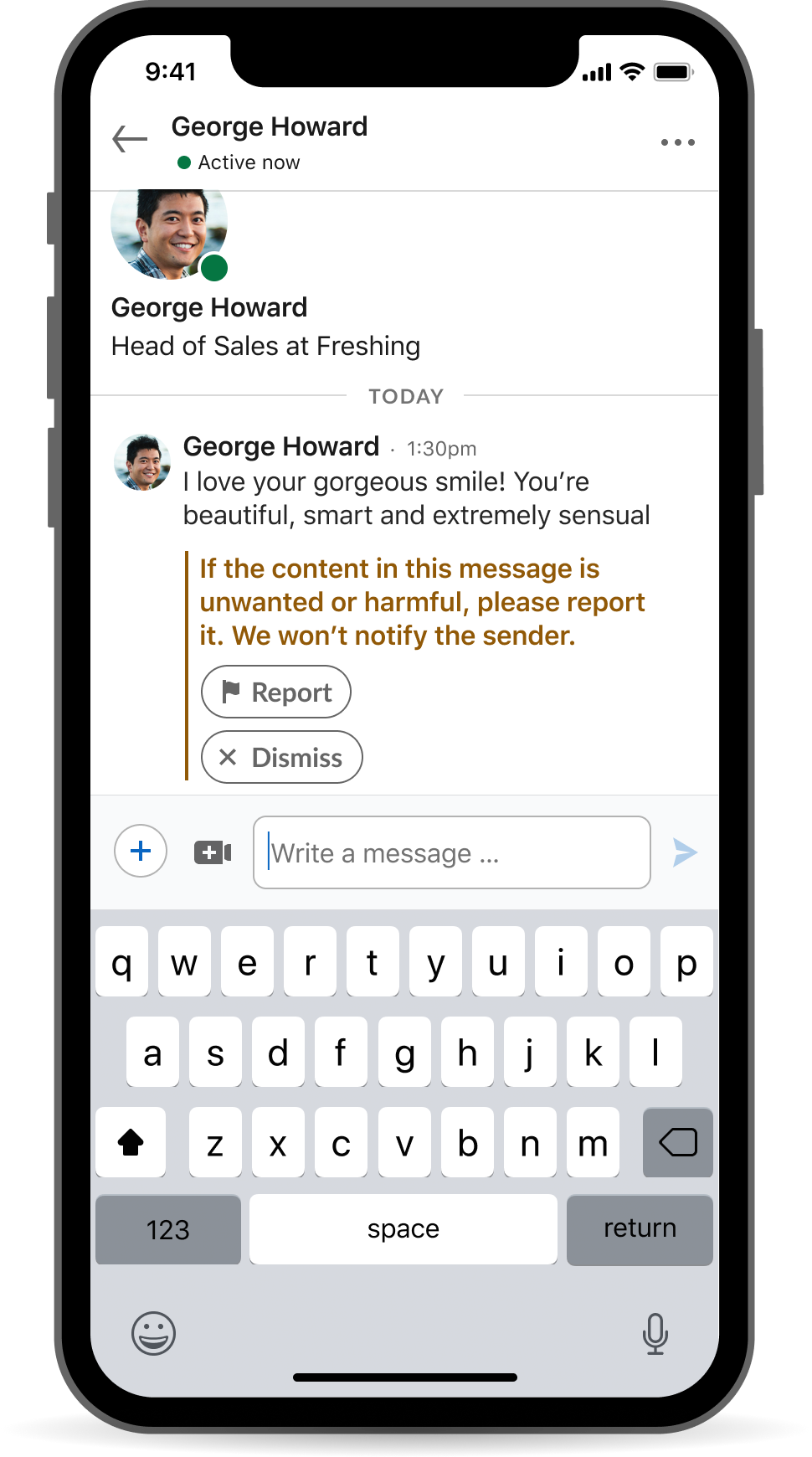 While such a feature lowers the barrier for users to report unwanted advances, LinkedIn is unclear about what will happen after reporting; just that it will take “appropriate actions.”

And, as Fiore states in her Fast Company article, these tools don’t seem to acknowledge the underlying issue: that it’s mainly women who need to deal with this crap. They’re on LinkedIn to further their professional careers, and now they have to become full-time moderators, too?

So, a closing note to the men: stop using LinkedIn to hit on women. If you come across a pretty profile picture, no need to tell her about it. And please, please don’t send unsolicited dick pics via inMail. Nobody endorsed you for being a pathetic little pervert.

How to use it in a sentence:

“I WISH I COULD ENDORSE HER FOR BEING A WHORE,” LinkedIncel Alan screamed, after he saw Linda connected with Bob.