A spacecraft is about to slingshot around Venus, putting it on course for Mercury 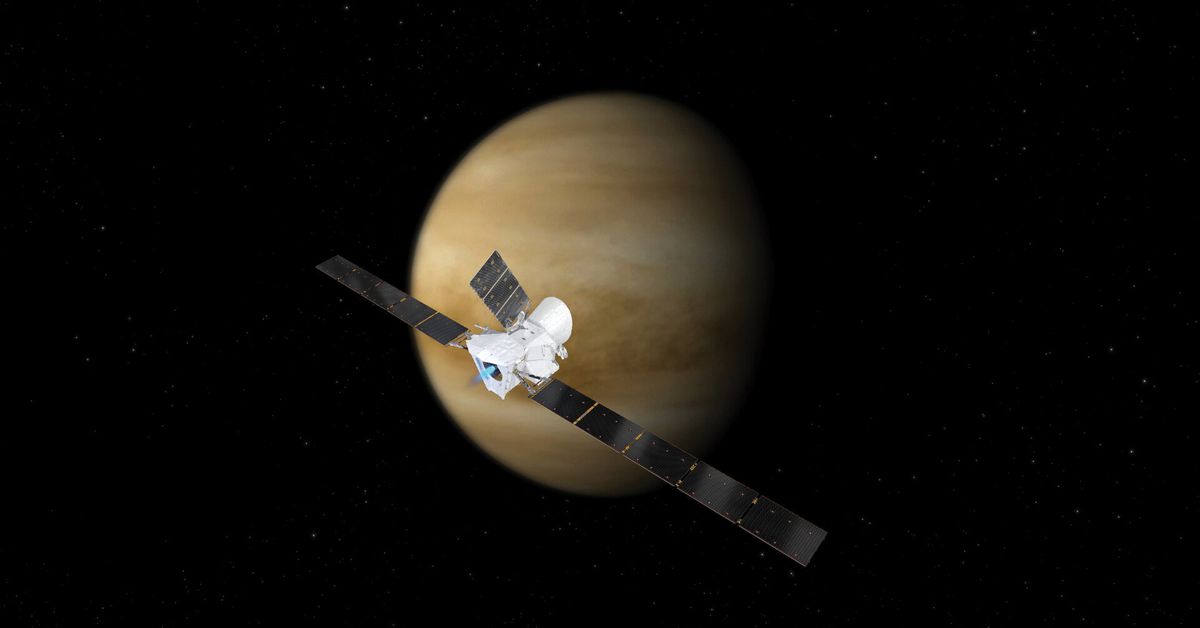 A joint European and Japanese spacecraft is about to slingshot around the planet Venus, performing a short gravitational dance that will change the vehicle’s course through space. This critical maneuver will take place just before midnight Eastern Time, and the spacecraft has to nail its routine in order to reach its ultimate destination — Mercury — within the next five years.

The spacecraft making this planetary swing is BepiColombo, which is really two spacecraft wrapped into one. The vehicle consists of one spacecraft overseen by the European Space Agency and another overseen by the Japanese Aerospace Exploration Agency. Once they reach Mercury, the spacecraft will separate and independently orbit the tiny world, gathering data about Mercury’s structure, atmosphere, magnetic field, and more.

“You need a lot of energy, actually, to put a spacecraft into orbit around Mercury.”

Launched in October 2018, BepiColombo is currently in the midst of a long seven-year journey, with the spacecraft entering Mercury’s orbit in late 2025. The road to Mercury is a lengthy one because of where the planet is situated in our Solar System. Since Mercury is so close to the Sun, any spacecraft trying to visit the planet is going to feel an extra big tug from the massive star — a gravitational pull that causes vehicles to speed up.

When designing the BepiColombo mission, the engineers decided to use the inner planets as brake pedals to slow the spacecraft down. “You need a lot of energy, actually, to put a spacecraft into orbit around Mercury,” Johannes Benkhoff, a project scientist for BepiColombo at ESA, tells The Verge. “And there are two alternatives in order to get this energy: one is to have a lot of fuel, which will make your spacecraft bulky and heavy. The other alternative is to use the help of the planets.”

Flying by Venus is crucial for the spacecraft’s trajectory, but the maneuver also provides a great opportunity for BepiColombo to study the planet. And there are a lot of scientists very eager to study Venus at the moment. In September, scientists announced that they had detected traces of a gas called phosphine in the atmosphere of Venus — a gas that is overwhelmingly associated with life here on Earth. The detection is nowhere near enough to say that life exists on Venus, but scientists are very curious to learn more about the gas and where it may be coming from.

“We were asked by many sources, ‘What can you do about phosphine? Will you look at it?’”

Benkhoff says that the BepiColombo team has received many requests for the spacecraft to search for phosphine in the Venusian clouds. “Of course, the phosphine detection put a lot of attraction to Venus,” he says. “We were asked by many sources, ‘What can you do about phosphine? Will you look at it?’”

He says the team is happy to look for the gas, but he doesn’t expect to get very good data since BepiColombo’s instruments are optimized for Mercury, where temperatures are warmer. “I doubt that our instrument is sensitive enough to detect it,” Benkhoff says. “That does not mean that we do not look at it, but chances are very, very unlikely that we will contribute here.” However, the engineers do hope to study many other types of gases thought to be present in the clouds of Venus. And they expect to get some nice pictures with a few “selfie cameras.”

While this Venus flyby is exciting, Benkhoff notes that the next one will be even sweeter. Tonight, BepiColombo will come within about 6,650 miles, or 10,700 kilometers, of the planet’s surface. But in November, the spacecraft will fly by Venus again, getting 20 times closer and coming within 341 miles, or 550 kilometers. In many ways, this is a scientific test run for that second slingshot maneuver, Benkhoff says. “We hope that during that flyby we can even get better results and higher resolution.”

How to Have Morning Sex